28*F and a Surprise at Dawn

Woke up before dawn this morning, during our cold snap.  The house was cold, but that's to be expected when you don't run the furnace.  Dave said there was a surprise outside.  I was expecting an ice storm. 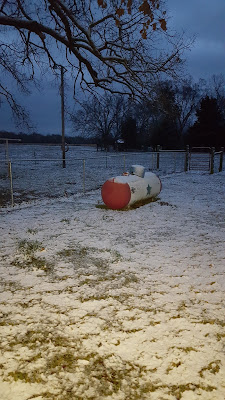 So this was better than that, at least, though Ruby and the hens might disagree. 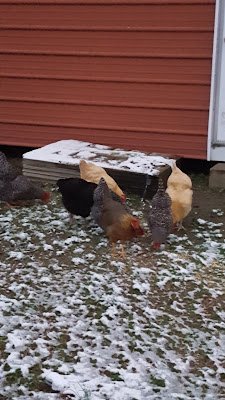 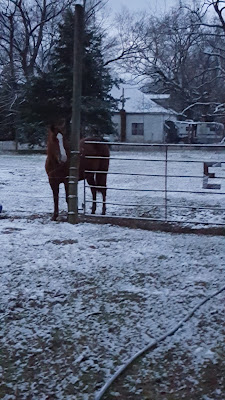 The hens got some scratch to warm up with, and Ruby got a flake of hay to start her day. 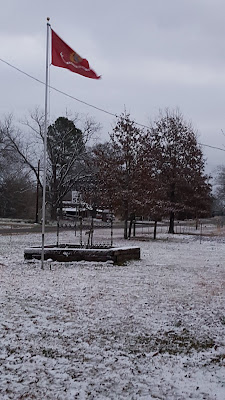 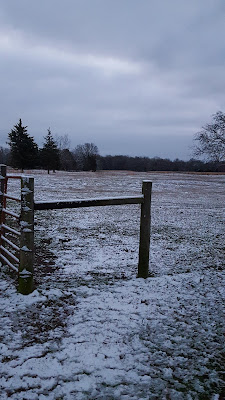 There was less than an inch, and the roads look to be clear.  That's good, because my tires on the Tundra are not quite slicks, yet!


Posted by Monkeywrangler at 10:17 AM No comments:

For those of you wondering what winter is like in NE Texas, I give you the following...

Weather for the past 24 hrs here:
Yesterday it was 72° with winds hiding over 30mph
Last night we got over 4" of rain.
Last night there were tornados all around NTX/NETX.
This morning it was 32°.
Now sleet, and possible snow early this afternoon.
Posted by Monkeywrangler at 11:19 AM No comments: 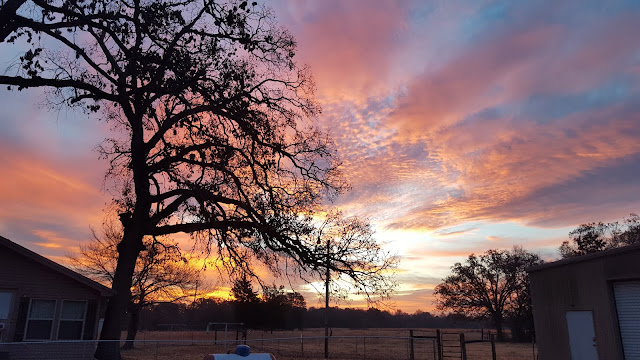 Wishing everyone a safe and blessed Wednesday!
Posted by Monkeywrangler at 10:51 AM 2 comments: 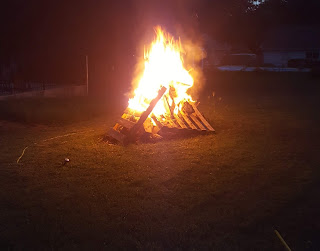 
She was just a little yellow cur dog.  My daughter had seen her, as we drove down the county road.  Just sitting, as some dogs will do, in the bar ditch.  We thought she was just sunbasking there.  We drove on, like everybody else.

On the way back home, from dropping off my daughter at her temp job, I was passing by the same spot, and there was now a large SUV pulled over.  As I slowed to move around it, I looked left into the bar ditch.  And I saw her, just a little yellow cur dog. Still sitting in the ditch, swaying back and forth.  So I pulled the Civic over, stopped, put my flashers on, and got out.

The woman in the SUV got out, and told me her husband had seen the dog earlier, and called her to drive down here and see what was wrong.  It was a small act of mercy that she did so, because that was what made me stop.

As I walked across the road and down into the ditch I looked at the dog, and I knew, deep down, how this was going to end.  As she rocked there, back and forth, I could hear and see the agonal breathing, I could hear the rattle in her throat and lungs.

She was just a little yellow cur dog without a name.  Young, never had been bred (thank God there were no puppies to find), maybe 30 pounds of dog.  No tags, no collar, I doubt she meant anything to anybody.  Thin, but not emaciated, at best she was someone's yard dog, one to be fed on occasion, but nothing more.

I walked up to her, talking gently as I approached.  Some animals when injured, will lash out in fear and pain.  I didn't want to get bit, nor to scare her into trying to flee.  As I assessed the injuries, I knew she was never going to flee.  She did not react to my approach, never looking at me as I stood right in front of her.  I reached out to scratch the uninjured back of her head, and she flinched slightly at first, but then relaxed, and I knew.  She couldn't see me.  She couldn't hear me.  But she could feel a gentle touch.  I stood close, and blew air down at her, in hopes that she could smell my presence and perhaps take comfort.

I told her I wouldn't leave her to die in this ditch alone.  I didn't expect it to take long, a few minutes at best.  The other woman called the Sheriff, and we thought they were sending a deputy out.  I called the game warden's number she had, but the voicemail was full.  Then the other woman had to go, but we kept in touch vy text.

I had nothing in my car to move the little dog, and was unwilling to just pick her up in my arms for fear of hurting her worse and getting bitten in her fear and pain.  So I stood there, keeping the flies off her, just stroking her head and talking in case she could hear something.  Many cars went by, some slowed, to make sure I was ok, but none stopped.

After close to 90min, far longer than I ever thought she would still be hanging in there, I called the Sheriff's dept, only to learn there had been a misunderstanding in the initial call.  They thought the dog was dead.  "Not yet,"  I replied.  They promised to send someone out.

After about 20 min more, I decided I'd try to move her to my car somehow.  I spotted a feed sack down the road, and went off to grab it.  Not long after I returned to her side, a deputy arrived.   We chatted about the situation, the deputy clarifying that they are not allowed to transport or put down an injured animal.  She then offered to help me get the dog onto the sack.

My plan was only to get her out of the ditch to the nearest vet, to end her suffering.  Her injuries were too extensive--shoulder, pelvis, jaw, brain, ribs, lungs....She struggled a little in fear at being unbalanced on the sack, but never lashed out.  She was such a good dog.

The vet confirmed my suspicions on the brain injury, and some of the others too.  He asked if I wanted her put down.  I said yes, that I had brought her in  from the road just to end her suffering as gently as I could.  I told him I'd been with her for 3hrs, and that she had been hit hours before that.  I stroked her as the vet administered the shot, and it did what she could not, it allowed her to let go immediately.

She was just a little yellow cur, but she was as tough as nails, yet gentle even in her final moments.  I wish she had never been hit, but she was.  I wish, once hit, that she had perished immediately, rather than suffer for the hours that she did.  I wish that I could've done something more to help her, but I couldn't.  So I did the only thing I could.

Posted by Monkeywrangler at 9:55 AM 3 comments: