Yes, Virginia, I've been to Paris!  With my bicycle!  No, Virginia, not THAT Paris, this one--and a picture to prove it, complete with the local Eiffel Tower.  That's my Giro recumbent on the left. 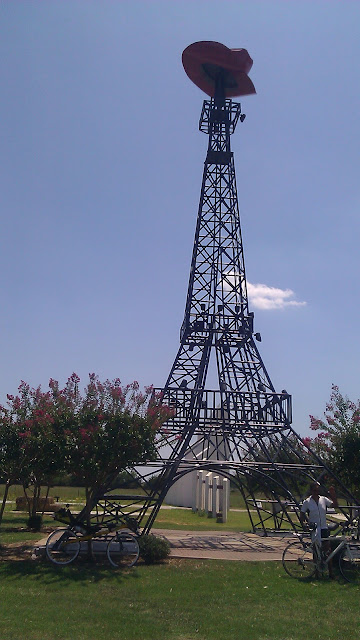 Yes, I spent yesterday in Paris, TX, not Paris, France, and not going as fast as those guys in the TdF either, but still, I didn't do too badly--Avg speed was 14.2 for most of the ride, and slipped in the last 10mi or so to 13.9mph.  Considering the heat in excess of 100F yesterday I am pleased.

I rode the 28th annual Tour de Paris TX, on the 110K route.  With about 20K to go, I began to question my thought processes that led me to bypass the 90K cutoff.  Had I taken the 90K cut, I would've been "home in the barn" by the time I hit 20K left to ride...  Still, suffering has a certain value, and makes for a better story!

I had a lot of fun on this ride.  The SAG stops were well manned, and exquisitely supplied with ICE!  Yes, ice was the order of the day yesterday, especially after I figured out I could load ice straight into my arm coolers and it would dramatically lower my core temp.  Plus with the ice, the evaporative cooling effect of the arm coolers was enhanced for a longer time.  The routes were clearly marked, and there was excellent LEO support at critical intersections.  There was a pancake & sausage feed in the hours before the ride started, and all riders could get a fresh made fruit smoothie, potato chips and a really tasty hamburger after they finished.  They even made sure there was plenty of food left for the folks on the 110K circuit.  The city of Paris even gave us an entire road lane, coned off for almost 8mi, all to ourselves!  These folks KNOW how to put on a bike ride!

Another neat aspect was seeing what appeared to be the entire population of Paris TX turn out on the streets to cheer us riders on!  There were Boy Scouts and Cub Scouts at attention, with Anerican flags, there were townsfolk with cowbells (just like in the Tour de France!) and signs...it was a fun time, riding through town.  For a split second, with the sound of the cowbells in my ears, I could imagine I was riding the TdF...then reality set in and I found myself in Texas in the heat, on a recumbent!

I was debuting a new set of wheels on the TdP.  A set of 700c Velocity Deep V rims with Deore XT hubs, and 700x23 Conti tires.  I had only ridden the Giro with the 700c wheels on one other weeknight ride, but they'd worked out so well, I couldn't wait to try them on a long ride, and they did NOT disappoint.  I was still 1.5mph avg faster with the 700c wheels than with the stock 559's on Formula hubs.  A number of times, I found myself able to pass roadies, even on the occasional hill!  Once Dave gets his 700c wheelset built up, I imagine I will leave the white 700c set on my Giro until winter.

Here's a link to my ride.

Posted by Monkeywrangler at 3:32 PM No comments:

With a year of exercise under my shrinking belt, and a recent 5k walk, I have watched my kids and husband start/restart running.  I have never been a runner--even as a kid I used to say I would rather ride 25mi on my bike than run 1mi.  I got booted out of AFROTC for being too slow on the run...such is life.

Still, as my health and fitness have improved, I harbored a secret desire to run.  I began looking at C25K programs, and online techniques etc.  I stumbled on this, The Hundred Up.  It's real oldschool stuff, dating back to the beginning of the 20th century.  But it seemed to address some of my issues with running--heavy heel strikes jarring my body excessively.

While I haven't really practiced what it says, I have tried the concept.  Shorter stride, and landing deliberately on the forefoot to make use of the body's natural shock absorbing mechanism of the lower leg and foot.  It actually works.  My knee still isn't really happy, but that's a different issue, and not caused by running.

So after last night having to put up with Cody-dog whining  incessantly over not getting to go out on the run with Shiloh-dog and Dave, I decided to take him for a walk to the store for stamps.  As I considered this, I opted to try jogging it instead.  I guessed it would take less time, and be better exercise.  Out I went.  I managed to jog the whole thing, only stopping for crossing the busy street, and to transact business in the store.  I concentrated on keeping a short stride and landing on my forefoot each time.  Nothing hurt particularly, and I felt good.  I know a run of just under one mile in 14min isn't very impressive by most folks' standards, but ya gotta start somewhere...baby steps, baby steps!

I might have to start doing this jogging-thing for real!
Posted by Monkeywrangler at 11:21 AM No comments:

Saturday July 14 2012, was the first running of the Alan Floyd 5k.  You can see Alan's story here.  Alan passed away on the 9th after battling cancer for over 18mo.  He was a friend and coworker of Dave's.

Not being a runner by any stretch of the imagination, I opted to walk the dog, while Dave and the kids ran.  The kids have been wanting to do another 5k since our first, last fall in Winchester KS, (the Nathan O'Neill Memorial 5k Pura Vida Run).  Dave has run off and on, since losing so much weight, so he was doing well.

At the start, I shot a couple pics.  Here's our crew, sans me (taking the pic). 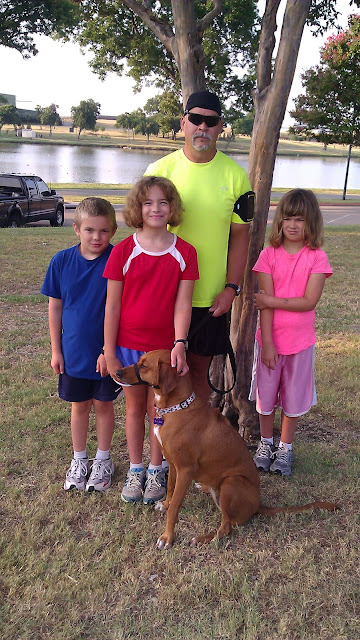 I looked up to see Dave crossing the end of the dam (we ran around Bachman Park in Dallas), with no Monkey2 in sight.  Eventually I spotted him crossing the dam, about 400yds in front of us girls.  That was the last I saw of Monkey1 !!

Yeah, I couldn't find Monkey2 on the route at all!  So you can imagine the stress levels ratcheting up a bit--imagining Dave coming back to meet us and expecting me to have all 3 kids, and only having 2...  I saw places along the route where he could've gotten misrouted or lost....I imagined all sorts of mishaps, both accidental and involving foul play...

At the last water stop, I asked the volunteers if they had seen a small (9yr old) boy in blue come thru, and they were uncertain.  This did not help my state of mind any.

Perhaps it is the nature of Moms to worry about their children.  Perhaps I worried unnecessarily.  But it was an area we had never been to before, and there was a significant distraction available to Monkey2--Love Field. Yes, he still adores airplanes, and has a fondness for Southwest Airlines, which so happens to fly out of Love Field--right over Bachman Park at about 200' off the deck!  So I worried, right up until I saw Dave come around a corner walking toward us, with Monkey2 on his heels!  YAY!

Seems Monkey2 just ran his own race!  After Dave finished in 29min, and started walking back around toward us, he spotted Monkey2 running on his own around the path.  When they caught up to each other, they continued walking back to us girls and caught up to us just after the last water break.

I finished up in an hour total as best as I can reckon, having forgotten to turn on the phone and Strava.  But that distance and 60min is my typical pace with the dog, so I think I was accurate enough.

I was really proud of Monkey2!  He ran his own race, and stuck with it too!  He didn't quit, and he didn't get lost.  He should do well in the 2012 Pura Vida run I think.

After the run, Dave jokes with some coworkers. 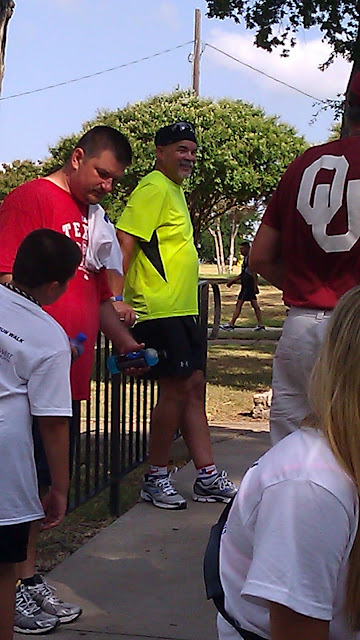 And later that evening, after grilling steaks, a rainstorm blew through, and left us this little bit of glory... 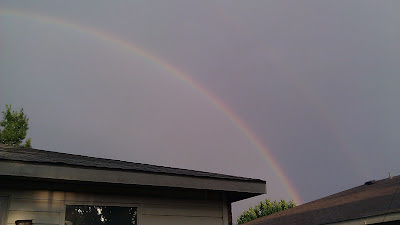 It's faint, but it is a double rainbow.

Posted by Monkeywrangler at 11:40 AM No comments:

VBS starts this week, for the kids, and that amounts to a mini-vacation for me!  Yes, I have 3-3:30hrs all to myself!  Yesterday was a chance to visit with a good friend from church, who will be leaving the States for up to 2 years, or maybe for ever.  It was a nice chance to visit, and to agree to help her out with some of the details of this move.

The rest of the week with my time off, is dedicated to riding.  Today I got home from dropping off the kids, and went out for 17mi on my usual evening route.  The wind was practically nil, so my avg speed was up a bit which was nice.

I can't seem to figure out how to embed the ride here in the blog, so this is a LINK to the ride.

I plan on riding every morning this week, and then relaxing for a while in the easy-set pool.  The water feels cold at first, which in the typical Texas summer, is mighty nice.  We set the pool up over the 4th, for the kids, and also for us to enjoy.  Shallow enough to be safe, deep enough to enjoy.  However, there are ongoing expenses with a pool, even a small one.  Chlorine, testing kits, stabilizer, pool-shock....it all adds up.  At least it is holding water well, and apart from the initial fill, has not needed much in the way of topping off.

It may not seem like much of a vacation, 3 hrs a day, but to me it is priceless!  It is so seldom that I get a block of quiet time like that. Part of me is tempted just to sleep, and try to catch up some on lost sleep.  But I think I am better served riding daily.  I don't get a chance to ride daily, as Dave & I alternate ride-nights.  This should help me perform better on the Tour de Paris later this month.  I signed up for the 110K ride.  If the heat is tolerable, I should be fine on it.  Otherwise I might take a cutoff for a shorter distance.

Hope to see y'all down the road!


Posted by Monkeywrangler at 3:13 PM No comments: