Ain't that the truth? 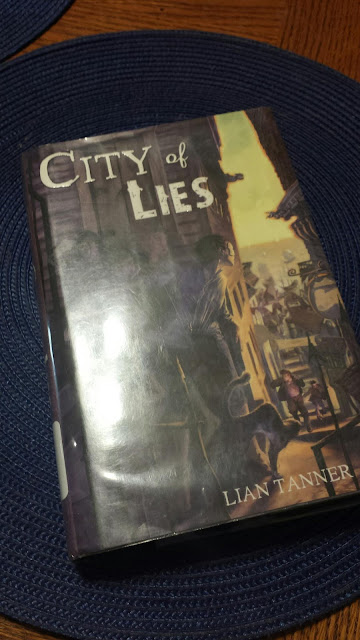 Cover of the latest book Monkey 1 is reading.  DH and I both thought it was about Washington D.C.!
Posted by Monkeywrangler at 7:36 AM 3 comments:

So this past week I have been following the Race Across America, or RAAM as it is known.  Imagine the world's longest time trial bike race, starting in Oceanside CA and ending in Atlantic City NJ...The clock is always ticking, and you have to hit certain time stops by a certain time or you get DNF'd (Did Not Finish).  Oh, and all the race takes place on OPEN public roads, not closed courses like in the Tour De France.  So watch out for traffic!

There are multiple categories for racers to qualify in...team events with 2,4,or 8 riders, male only or female only teams, mixed teams etc.  And then there are the soloists.  Yeah, one racer, riding all the way across the country, no drafting allowed, mostly without sleep (typically 90min sleep a day) because that clock is always ticking, and you have to get to the end before time runs out.  If you're not pedaling you are losing precious time!

As a spectator to RAAM, it can be a challenge.  The riders are strung out all the way from western Kansas to Maryland at this moment so you can't really just stand by the road and watch them ride past.  There is no TV coverage to watch either.  The GPS tracking system the racers use, while public, is unreliable in hilly/mountainous areas.  So you learn to follow social media, where most racers have some sort of presence (facebook, instagram, twitter etc).  If they have their crew's media person(s) keeping tabs on everything, then there will be regular updates, and even quick replies to querys from the public.  Because, riders need inspiration, especially when the road runs uphill into the wind, and the heat and humidity are nearly both in triple digits...and that inspiration can come from those of us who follow their exploits, sent in message form to encourage, and sent financially to those riders who ride for charity.

Probably the most appealing thing about RAAM is the riders are mostly just regular folks, driven to do something mindbogglingly difficult.  Folks like some of those I know and ride with at times.  Folks with regular day jobs, folks like you, like me.

Thr Tour de France is a totally different beast.  Pro riders, teams, pelotons, drafting and strategy allowed, closed roads, etc.  Oh, and they cover about 1000 less miles than RAAM and do it in more than twice as many days(with built in rest days)!  And they call themselves the hardest sporting event in the world...

I do enjoy watching the TdF, don't get me wrong.  I like watching bike racing.  And I know my skillset on a bike does not include racing, at least not that type.  I've more of a mind to do 24HRs in the Canyon, or Sebring, or The Texas Time Trials.  At least those events DO permit recumbents!  (So does RAAM).

Back on the bike!

So last week Doc cleared me to start riding my bike instead of just the tandem.  Yay!  Off the trainer at last... or so I thought.  Alas the weather  had other ideas, and TS Bill came to visit and bring lots more rain to NTX.

Finally, by Saturday I opted to go riding, though I skipped the regular Java ride with the bike shop bunch.  Sticking relatively close to home, in case the shoulder gave me any problems, I set out.

Things took a couple minutes to settle in, having to balance and steer, but except for some tenderness in the shoulder if I hit a rough patch in the road, the ride was pleasantly uneventful.

Posted by Monkeywrangler at 9:53 AM 2 comments:

Please keep the congregation of Emmanuel AME church in Charleston SC in your thoughts and prayers, as they grieve and try to heal after the horrific murders there last night.

Pray that their killer be apprehended quickly, and without any harm to officers or the general public.

Pray that those who would seek to use this tragedy to further their own divisive agendas would be kept far away, by those who truly seek healing, peace and justice.
Posted by Monkeywrangler at 7:55 AM 1 comment:

No longer a "teenager"!

Indy turns three!  Yesterday marked the anniversary of our adoption of Indy.  At the time we adopted him, we were told he was approximately 2 years old.  Not knowing his real birthdate, we decided to use his adoption date and count from there forward.
Thus, Indy is now 3, in calendar years, or 21 in human equivalents.  So, no longer is he a teenager!  Yay!  Though I think his personality will be that of a puppy for his entire life.  He just enjoys life far too much to ever "grow up".
In honor of his birthday, and to avoid having the Monkeys try making him a dog-safe cake, we opted to head out to Sonic where we could bring Indy along for a treat.
Somebody couldn't believe his good luck!  Soft serve ice cream in a cone.  I wasn't sure he'd know what to do with it at first.  Then I guessed someone else might lose fingers as the Landshark Jaws snapped shut around the rapidly melting treat.  I was wrong!

Indy delicately nipped at and licked the ice cream.
Lick lick lick lick lick!
Now how to get the ice cream out of the deep narrow part?  Good thing I have a long tongue, says Indy!
All gone!  Can I have another?  Yes, after demolishing his own cone, he began nosing around everyone else's for a second one.  Typical Indy!

Posted by Monkeywrangler at 10:40 AM 2 comments:

A family tradition here at Casa Monkeywrangler, is on Mother's Day, the family takes me out fishing.  We all love to fish, having the best time on our vacations back to Kansas, where we stay at a private church retreat belonging to our old church, with a 3ac pond that is full of fish.

This year however, the weather has not been cooperating.  Too much rain to fish.  Until that is, this week.  It's been about 9 days now since it rained.  So tonight the plan is to go fishing after it cools off a bit and gets closer to nightfall.  In the small ponds where we fish, they tend to be more active early morning, and late evening.  And since everyone has more fun when the fish are biting, not just the B-52 sized mosquitos, we are going in the evening.

Worms were procured at the local Big Box Mart, and promptly ensconced in the fridge so they did not expire in the heat (91*F at 5pm).  After dinner it was time to go fishing!  DH wasn't feeling well so he stayed home in the a/c.  The Monkeys and I went down to the local park ponds and soon found a good spot. 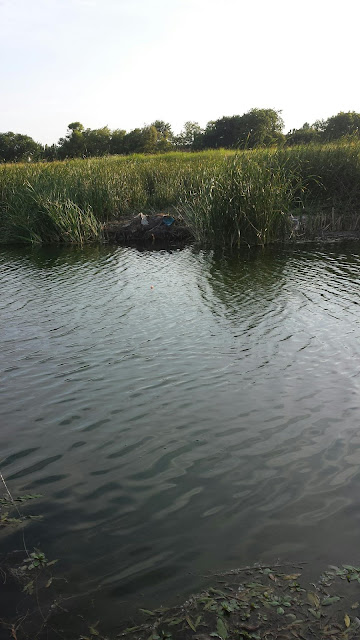 This is our favorite pond to fish in.  It has a more natural appearance than the north pond with its man-made rock edging.  There are a few large bass in  the ponds, some medium catfish, and a  boatload of bluegill.  There used to be warmouth in the ponds too, but we haven't seen them for a couple seasons now.  I miss them, as they were bigger than the bluegill, and fought more than bass. 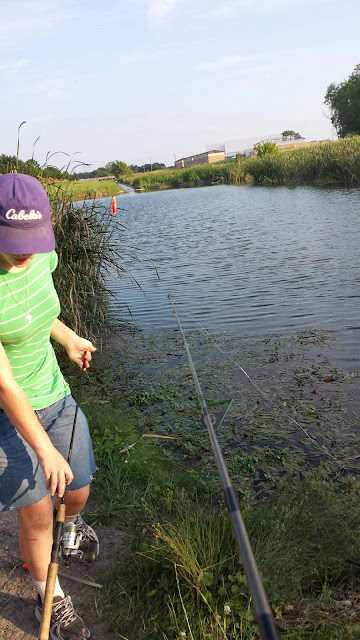 There are a lot of smart turtles in these ponds too.  Smart in that they know what a bobber is, and that it means an easy meal just below it.  Dumb in that they never seem to understand the free meal comes with a barbed hook in it.  I ended up catching one fingerling bass, a good handful of bluegill of various sizes, and 3 medium turtles.  All catches were released back into the pond, though one or two bluegill were destined to be turtle chow, as they were damaged during hook extraction.

It was a nice evening, with a breeze and few mosquitos (thanks to DEET).  All of us made catches, so everyone was happy.
Posted by Monkeywrangler at 9:43 AM 1 comment:

A peek at my week, in a rather random way.

1.  DH has started to get a little overtime with work.  It's nice, financially, though I miss him when he is out late.

2.  Last week DH wasn't feeling 100%, and now this week I have 2 Monkeys down sick with bronchitis/walking pneumonia.  The doc gave them some meds that should get rid of it, assuming it isn't viral in nature.

3.  I started PT on my shoulder this week, after getting my ass chewed by my surgeon last week for doing too much with my arm.

4. When asked by one of the PT folks what my goals were, I said I wanted the shoulder back to normal so I would be able to deadlift 225# by December.  The female therapist looked at me like I had suddenly sprouted devil horns or something!  Luckily the male therapist was more understanding...and said, well that's 6 months out, you should be ok by then.

5.  We've had a full week of sunshine here in NTX, with warm temps.  I really miss being able to ride outside.  Maybe DH and I can do a longer ride on the tandem this weekend, in preparation for the Collin Classic bike ride next weekend.
Posted by Monkeywrangler at 12:05 AM 1 comment:

Spirit in the Sky

It is said, that all dogs go to Heaven.  In that case, Cody just said "hello!", as I walked through the subdivision to collect an errant package the dyslexic postal worker left on the wrong porch.
Cody hated hot air balloons with a passion true to his Ridgeback heritage.  They were the Lions of the air, to him, and he sought to drive them away at every chance.  This morning, I saw another balloon flying hear the house, and as I looked at it, remembering Cody, I realized there was a Sun Dog in the high thin cloud layer, right behind the balloon!  I knew then Cody was making himself known.
I leave you with some dog haiku, in memory of Cody.