All Cooped Up At Last!

With the nice man bringing internet here to the house after 2mo. without it, I will finally be able to post about our coop building!

Now that we are living essentially rurally, we decided to have chickens, ostensibly to help cut our food bill.  However, that plan did not take into account the expense of building a coop.  If you haven't priced lumber lately, rest assured, it has gotten expensive.  However, now that the coop construction is (mostly) done, the only expenses should be feed, and chickens. 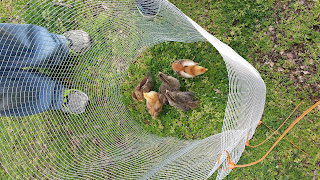 As we had gotten chicks at the Atwoods store in town, they had been living in the shop, in cardboard boxes.  We did begin construction of the coop almost immediately, but it was slow going. 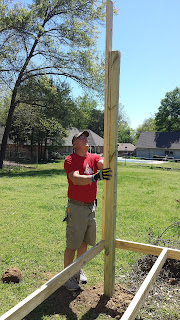 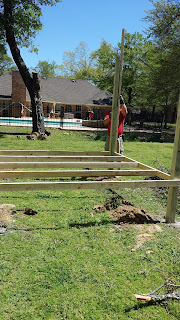 Corner posts were set, and then the floor joists were set, and plwood flooring put down.  We swt the coop above ground, to give the birds a place of permanent shade, underneath.   We put in a load of pea gravel for under the coop to keep things from getting muddy in the rains. 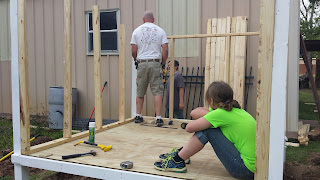 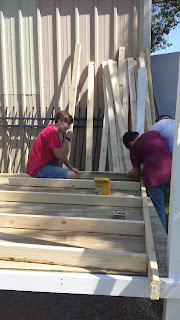 Walls were framed in, more than once...but eventually they were good enough.  Plywood walls were mounted, and it slowly began to look like a coop!  The kids did help quite a lot, in the construction.

Putting on the roof took some time.  Time spent deciding what we could use for a roof, and how to fix it to the roof.  Ultimately we went with a foam polymer, corrugated, like on an old quonset hut.  It's a pleasant darker green color.  We had some old white paint, so the kids have painted most of the rest of the coop white...except for the parts they can't reach.  Hmm, gonna have to figure out how to get one of them up on the cage to paint the high spots! 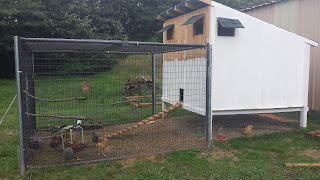 There's still a door, and trim to build, attach, and paint, and some more predator proofing to do assuming it ever stops raining!  There's already 3/4" this morning. It's hard to get dirt hauled in, when everything is muddy.

Compared to their size when we bought them, the chicks are huge now!  The guineas are in adult plumage and their faces are beginning to turn white.  Our Boss Chicken, Russet is huge, sporting a nice comb and wattles already--she's not quite full size, but not far from it either.  They are funny things, the chickens.  They have distinct personalities, some shy(Salt), some bold(the guineas), some bossy (Russet),  Others are just docile, and friendly, like the Buff Orpingtons.  I love those!  They are the caramel colored birds above.

They should start laying in October, at 6mo age.  That gives us some time to sort out building nesting boxes, and getting them mounted on the side of the coop for easy access to fresh eggs.  It'll be next spring before we know for certain, if we have guinea hens, or a rooster in there.  Apparently it is very hard to sex guineas. So if Samantha is a roo, she'll become Sam, or if Deanna is the roo, then she'll be known as Dean (my kids love Supernatural!)  My hope is they are both hens, but we suspect Samantha is really a Sam...If we see little keets running around next spring, we will know!  At least our chickens all seem to be hens.

We will allow the guineas to free range, and keep our fingers crossed that they are wily enough to avoid the dogs (Indy is just dyin' for chicken dinners!), and the neighbor's cats, plus the Mississippi Kites, coons, and other beasties that love chicken for dinner.  Once the chickens are full grown, we may allow them some free range time, provided one of the kids is around to watch them.  Chickens are just not as survival oriented as the guineas. 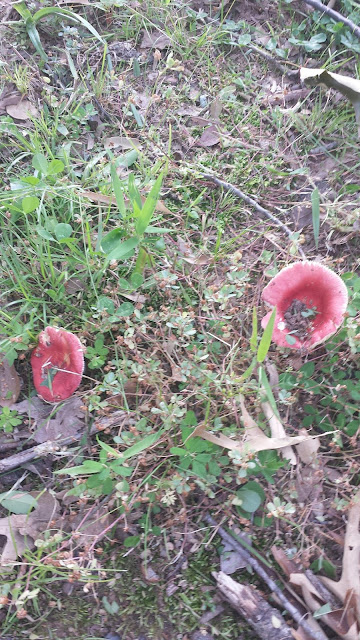 Posted by Monkeywrangler at 7:04 PM 2 comments:

1. We have mostly finished the chicken coop. Eventually there will be a proper post on it.  At least the birds now have a proper home!

2.  This past week our e two had seen various things break around here.  The pool heater went out.  The ice maker went out. Then the water line heater to the ice maker failed, so that the water line freezes constantly, and no ice gets made.  I know, First World Problems...But annoying none the less, especially in a pricey two month old fridge!

3.  The highs all week have been only in the 60's.  Lovely weather, but not conducive for being in the pool.

4.  With all the rain lately, we haven't been riding, but instead have been lifting the nights a week.  Right now we are using Stronglifts 5x5.  We like it, though DH is finding he needs to lift heavier than the program progression is set for.  I'm trying to convince him to just bump the weight up and continue with 5x5 until he maxes out.  Then maybe shift to Wendler's 5/3/1, our Boring But Big.  I will eventually shift to Rippetoe's heavy triples, his recommendation for women lifters.

5.  Last night we had a beautiful, persistent complete double rainbow! 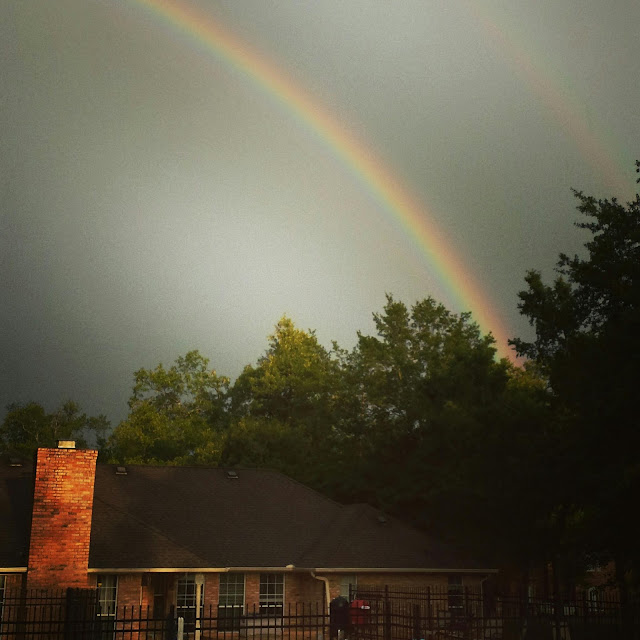 Posted by Monkeywrangler at 9:52 AM 5 comments:

It seems that last night, Mother Nature had it in for Lamar County TX.  At 17:45 last night, we were headed to a CERT meeting.  There were tornados up on the Oklahoma side of the Red River, but TX was clear.

I looked west, to see a storm cell popping up hard and fast, so fast it didn't even show on radar, but it was already anvilling out on top.  I mentioned this to DH, and told the kids by text to keep an eye on the weather and stay inside.

By 18:10, they were calling tornado warnings for that same cell, just a few miles west of Paris!  So we left the meeting early and we hustled home, stuffed the kids and dogs into the storm shelter, and started watching the clouds.

Those clouds got spooky!  Eventually one of the wall clouds went right over the house!  Fortunately, no funnel clouds were descending then.

Then the hail came...And it went in, and on, and on!  We had piles of hail on the roof, piles on the ground, and it wasn't small hail either!  We had nickle, quarter, and golf ball size hail!   Add in 60mph winds and you can see the recipe for damage.
In the light of morning, we assessed the damages.  Both cars have hail damage.  I'm sure the roof is likewise battered.  No windows were broken and no big limbs came down, though the pool was green with leaves so thick the bottom of the pool was covered!  The insurance agent has been notified, and this morning the kids and I cleaned out the pool, and did general cleanup around the yard.  Thank goodness for the Stihl blower!

Posted by Monkeywrangler at 10:19 AM 2 comments:

Linking up at www.aruraljournal.blogspot.com for Random 5 Friday.

1.  I got our wood chipper (from the auction) back from the small engine repair shop.  Motor runs fine now, but sadly the blades are so dull that it isn't really chipping anything.  So we opted to burn the brush piles.

2.  We suffered our first chicken loss yesterday.  Pepper, one of the two Barred Rock chicks died.  She had been a little "off" the last few days, but we don't know why.  Hopefully it isn't contagious.

3.  In a belated celebration of Earth Day, w are burning the huge brush pile from our downed tree to make ah to improve the soils for our big garden!

4.  We plan on finishing the chicken coop this weekend.  The chicks will appreciate the extra space, and DH will be happy to get his shop space back.

5.  DH is quite good at splitting wood by axe o.r maul.  I'd like to learn/get better at it.  Maybe the new Fiskars axe will work for me. 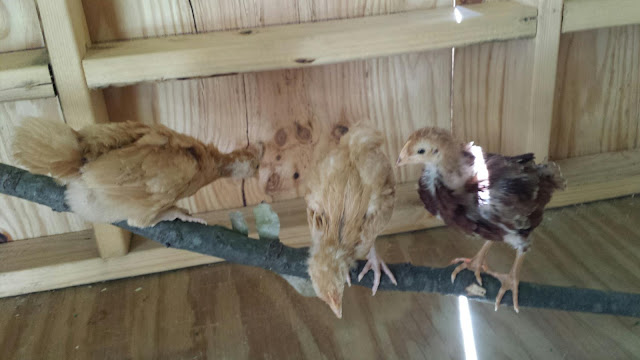 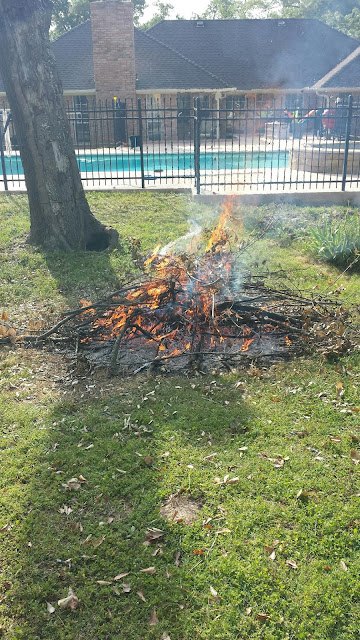 Posted by Monkeywrangler at 11:26 AM 5 comments:

May the 4th be with you!

Posted by Monkeywrangler at 7:42 PM No comments: