I was in the kitchen this morning working on biscuits and gravy, when DH whistled, and said "It's beginning." As he was on the computer, I assumed something unpleasant was in the news, but no, this was actually something pleasant. A true classic film was just starting, rolling through the opening credits, in letterbox format no less! The Bridge On the River Kwai, with Sir Alec Guinness, and William Holden, Jack Hawkins and Sessue Hayakawa. A movie I have long loved--less as an historical account and more as a fascinating character study. Based off of Pierre Boulle's fine book, it is nonetheless a work of fiction wrapped around an historic series of events, namely the use of forced labor to build a rail line in Japanese-held south east Asia.

As I was listening to the opening sounds of the film, I realized I was hearing dialog I had never ever noted before, despite countless viewings of this film. Oh, the dialog was there, it just never registered before now. For since I last saw the film, I had read and obtained a rare-in-the-US book, Banzai You Bastards, by Jack Edwards.

A year or two ago, I had read a copy of that book, borrowed through Interlibrary Loan. There are very few copies in public libraries in the US, according to ILL, and mine was loaned from Montana, IIRC. It was a autographed copy, signed to a couple ladies--I have no idea how they came into contact with Jack Edwards, but they apparently bought a copy of his book and brought it back to the US. It is the autobiography of Edwards' life as a Japanese POW in the copper mines of Tiawan.

I read it. I gave it to DH to read before it had to go back. We both agreed it deserved a place in our library at home, if I could but find a copy cheaply enough*. It was apparently only published overseas, and distributed primarily in Asia and in the British Commonwealth countries. If any of you ever get a chance to read a copy, I urge you to do so, even if it will not be a "pleasant" experience. It's not a 'happy book'. It is blunt and brutal and depicts explicit and cruel behaviors of the Japanese guards toward their prisoners. "Speedo! Speedo! Hammero! Hammero!" is a phrase and refrain throughout Edwards' book. It translates very roughly as "(work) faster, faster, or I will beat you with my stick!"

Listening to the film this morning, suddenly I heard the Japanese guard (actors) yelling "Speedo! Speedo!" at the British prisoners. I had never noted that before. I have not listened closely to the whole film again to see if "Hammero!" occurs anywhere in it, but after reading Edwards' book, I have no doubt that the actual prisoners who had to build that railway heard it.

I leave you with the trailer from the film. I urge you to find a copy of the book, and read it.


*I eventually found a US copy at a good price. As it would turn out,it was the SAME copy we had borrowed through ILL. The holding library apparently decided to remainder it, and I was lucky enough to purchase it.
Posted by Monkeywrangler at 2:30 PM 3 comments:

Let's be clear--I love BBQ.  I grew up in the KC market, and it truly has the best BBQ on the planet.  I have been in Texas now, for ten years, and have been converting Texans, one at a time, to the joys of Gate's Sauce...

I love to cook BBQ.  Yard bird, smoked turkey breast, brisket...all are good, though I personally am not happy with my brisket, though the guys seem to think it is quite fine.  But my forte, and my preference, is for piggy....glorious, delicious piggy!  Be it spare ribs, pork butt, bacon and baby back...all are on my personal favorites menu.


We had friends in town last weekend, from out of state.  So I made plans to 'Q up some pork butt.  Since I was expecting up to 9 total around the table, I snagged two pork butts to smoke.  After all day on the smoker, the bones just pulled on out... 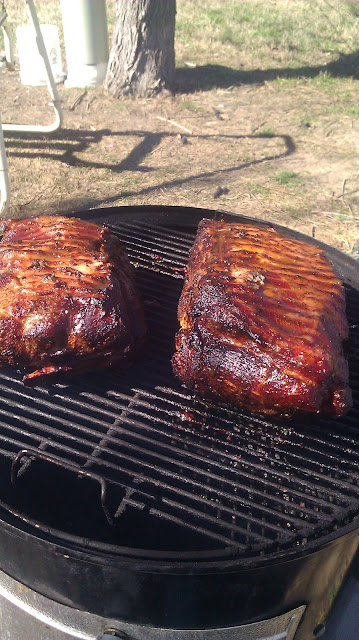 The pork after a few hours on the Weber.  Nowhere near done yet. 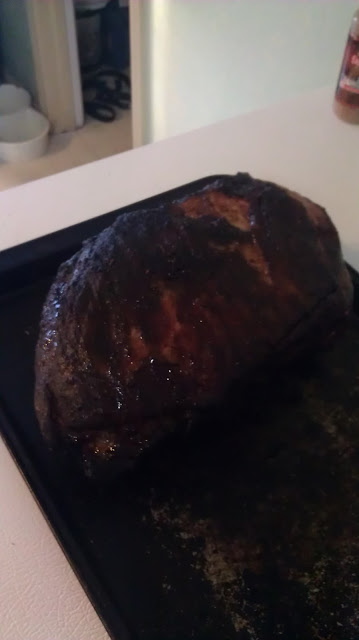 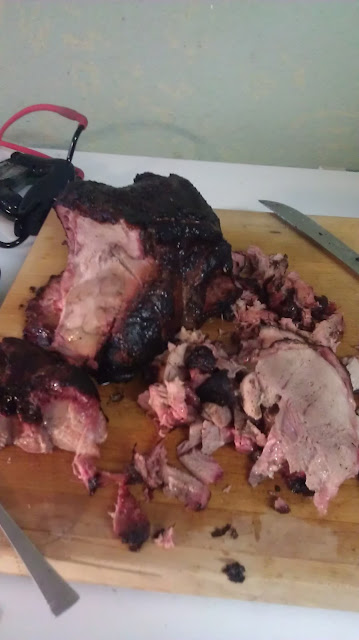 (Yes that is one of the Monkey's wrist rockets in the back ground.)


One tub of pulled pork went back home with our friends.  One got eaten by us, and a second started into, and two more tubs got frozen for later enjoyment!

Sauces of choice were Gate's (of course!) and Sweet Baby Ray's Hickory & Brown Sugar, which is a fine sauce if one prefers a sweeter taste than Gate's.
Posted by Monkeywrangler at 10:07 AM 5 comments:

The Hounds of Renown

Dogs. I have dogs. What most folk refer to as "big dogs", with the smallest of them running about a lithe 65#. All three are hounds, of uncertain parentage, though in truth at least half of their bloodline is crystal clear! All are at least half Rhodesian Ridgeback.

It is apparently common practice to cross Ridgebacks with a variety of other breeds here in Texas, for use as Hog Dogs--for hunting feral/wild pig. Now I don't mind the practice of hunting at all. In fact I would personally enjoy a Wild Bacon hunt, but I will not hunt over dogs--period! When "that dog won't hunt", the dogs often get dumped on the local animal shelters, where if they are lucky, they will find their way into the local Ridgeback Rescue network.

All my dogs came from the rescue network. Our first, Charlie, stole our hearts as a little fluffy puppy.  He had what could only be described as a rough start in life, surviving long enough to make it to a Ridgeback Rescue that was willing to look past his uncertain parentage, and see the loving dog within.  Then he contracted Parvo (at less than 2mo age), and survived not only that but the treatment that left him scarred in two places.  He is my starter child--I've had Charlie longer than I have had my own 2-legged children.  I've had Charlie since he was barely 6mo old.  He's over 13yrs now, and showing his age a lot--failing eyesight with cataracts, hearing loss, and arthritic hips...but he's still my baby...

Next to the family came Cody.  He came to us through the same rescue as Charlie.  When we moved to Texas, my husband knew I wanted another dog, but our yard in Kansas had been on the small side.  Our back yard in Texas was significantly larger!  (Not quite Texas sized, though). 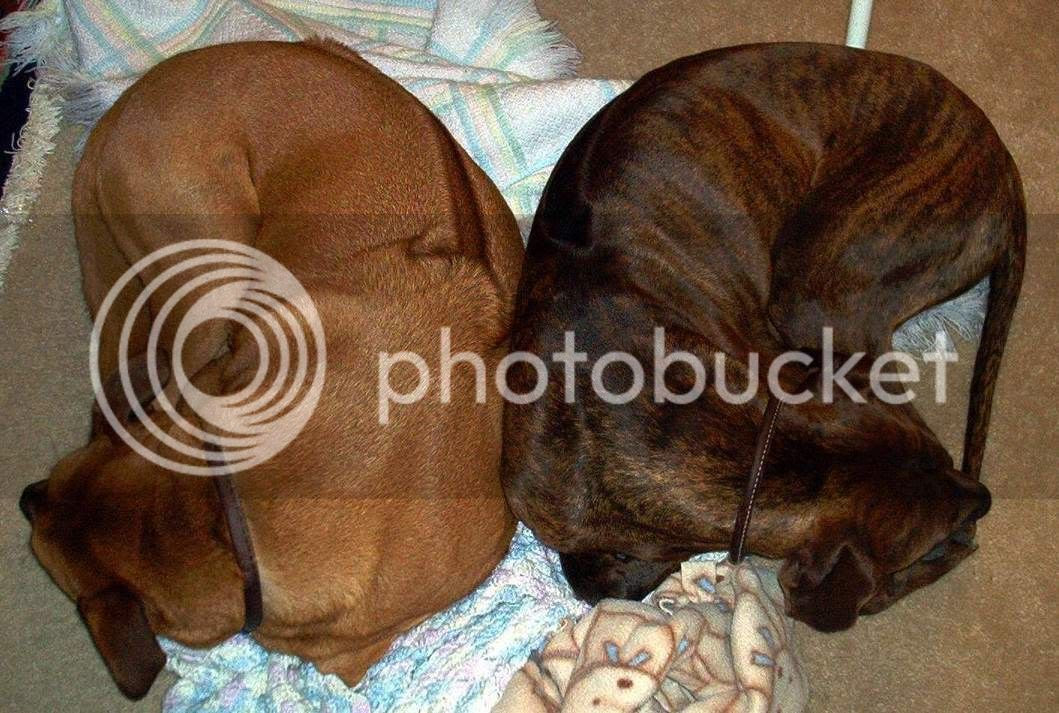 The Boys like to curl up together.  The Bookend Ridgebacks.  They even had their 15 min of fame, with Charlie being featured in a short article in Dog Fancy magazine a couple years back, as a Rescue Success, and Cody managing to sneak into the picture they used! 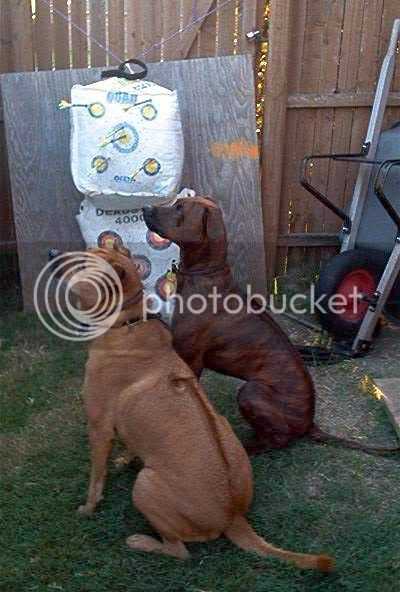 We later found out the Boys like to observe (aka chase) arrows.  Here they are, as Dave walked up, bow in hand, to retrieve the arrows.  Cody is such a handsome hound!

Then just this year, as Charlie's health grows ever more tenuous, we opted to add Shiloh, our not-so-little Couch Snurlger!

It was so funny to watch the Boys react to a female!  Sorta like a couple old potbellied men at the bar when a pretty young thing saunters in.  They puffed out their chests and strutted around after her!  Charlie, being the more dominant male, accepted her immediately.  Cody, being the beta-dog, still doesn't quite understand she out ranks him in the doggy hierarchy. 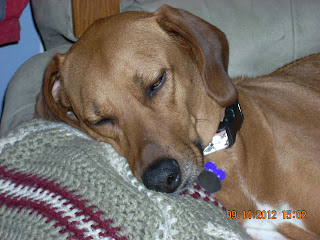 This is one of her favorite locations.  The dog couch, by the front windows, so they can look out at their leisure, and bark if they see fit.  Fortunately, Shiloh is not a huge barker! 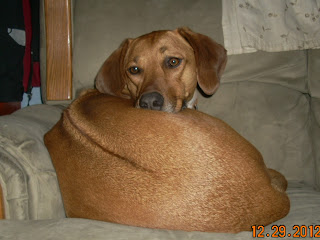 "Don't hate me because I'm beautiful", says Shiloh.  She can be quite the Diva!
Posted by Monkeywrangler at 11:26 AM 8 comments:

This afternoon I got a text from my husband asking what I had in mind for dinner today, it being Valentine's Day and all. I replied, "Nothing really. What do you want?" He replied, "Ribeyes, asparagus, Shiner Black, and to put the kids in the storm shelter for the evening." Now, he WAS only joking about the storm shelter, but at times...between 3 kids and 3 large dogs, I have wanted to lock MYSELF in the storm shelter!

So while running errands with a friend who has no car, we hit the store and I got said supplies for a nice dinner. I confess that timing a meal is not a strong point of mine. I can cook well, especially if it involves a grill and charcoal, but getting all the dishes ready on the table at the same time is an art I have not mastered even after all these years. But I am improving some. I have figured out that if I put his steak on, 10+min before mine, his will be sufficiently overcooked for me to process my steak in about 6 minutes total (3 min per side). Not quite 'blue' but definitely on the rare side! YUM! Just how I like my beef! Mooing...

The steaks were brushed in olive oil, and seasoned with a bit of Angelos, cracked black pepper and sea salt. The garlic bread I got had some more garlic powder added along with some Penzeys Bouquet Garni seasoning. The asparagus was sauteed in butter, and Kikkoman soy sauce added at the end. Lastly, the Shiner Black was served cold! On this rare occasion, I managed to get it all to the table at once, with everything still hot and tasty.

The Monkeys all shared a pizza and breadsticks, and are watching movies tonight. And lest you think I forgot the Hounds of Renown, no, they were not forgotten. They got the trimmings off the ribeyes, lucky dogs!
Posted by Monkeywrangler at 6:33 PM 5 comments:

Now for some classics

Just some classics from my personal pictures.  These good folk come through 'round here most every year.  Look up their schedule, if you love classic Warbirds!  The Collings Foundation.


Yes, Witchcraft really IS underway, with that guy spyhopping out the top! 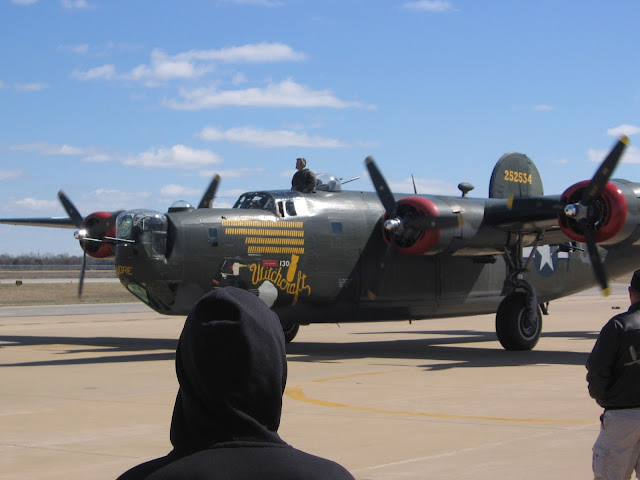 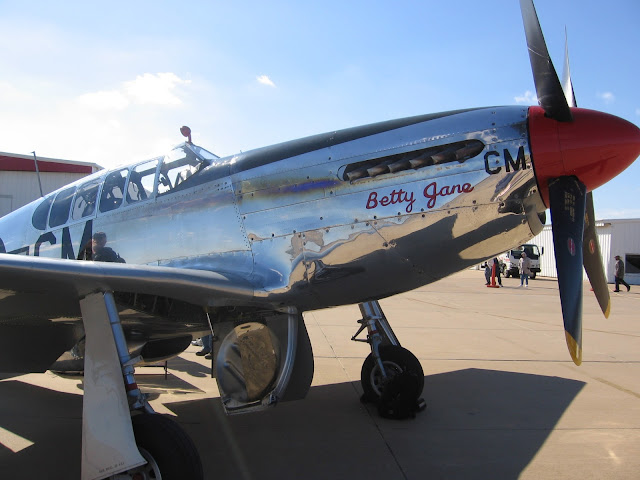 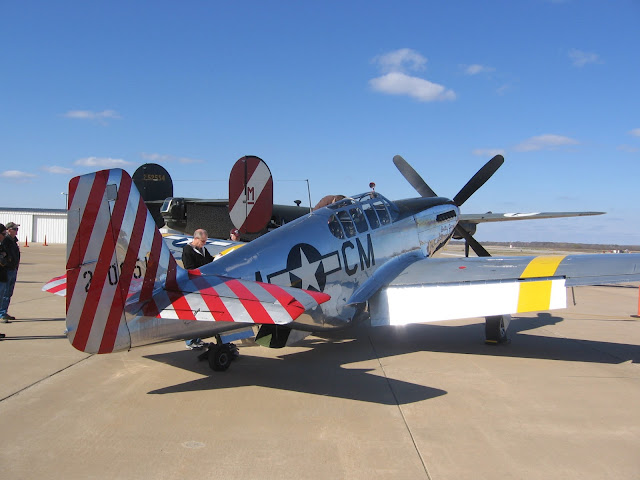 Now this is Betty Jane, and she is truly One of Kind! She is the ONLY dual control P-51 in the world! And ain't she a beauty?? 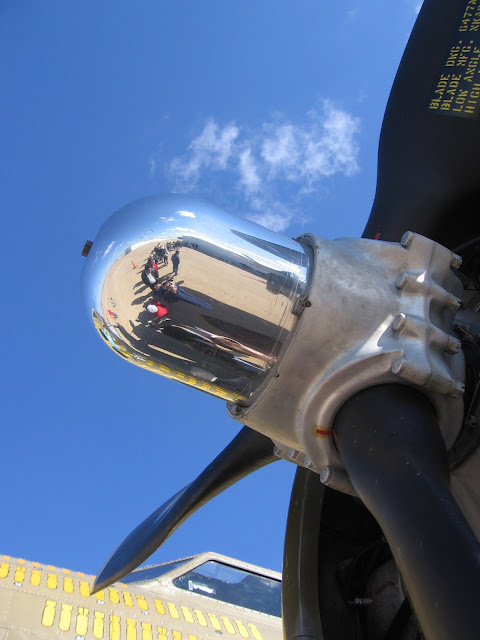 They sure do keep her shined up nice! 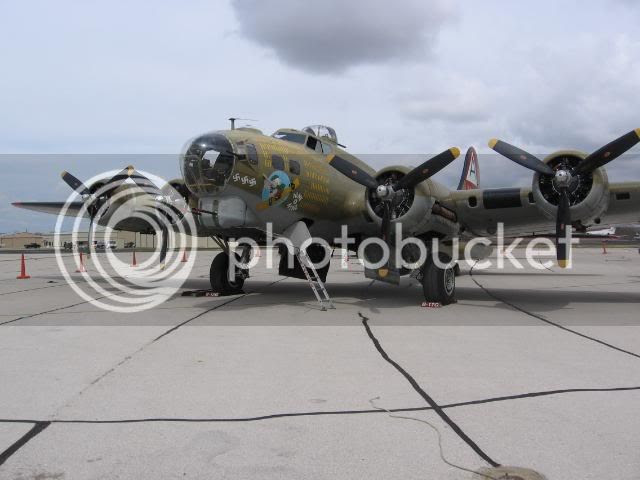 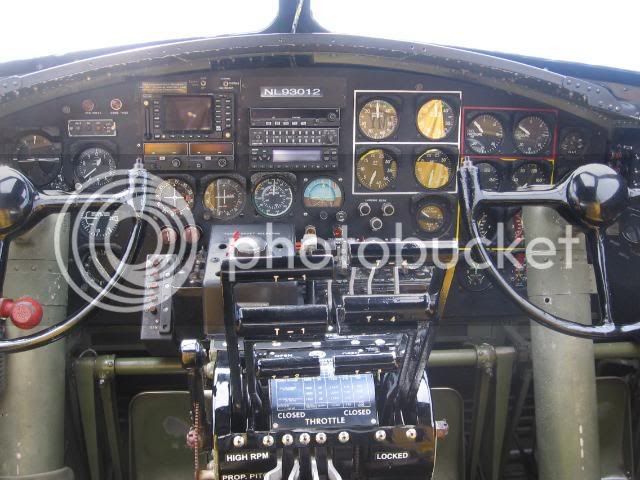 Yes, you DO get to tour inside several of these Warbirds!  It is fascinating! 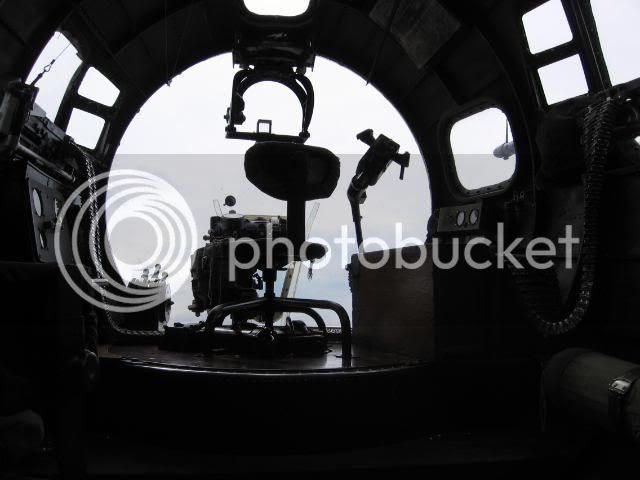 I found it amazing how little room those men had inside these aircraft.  And amenities?  Nope! 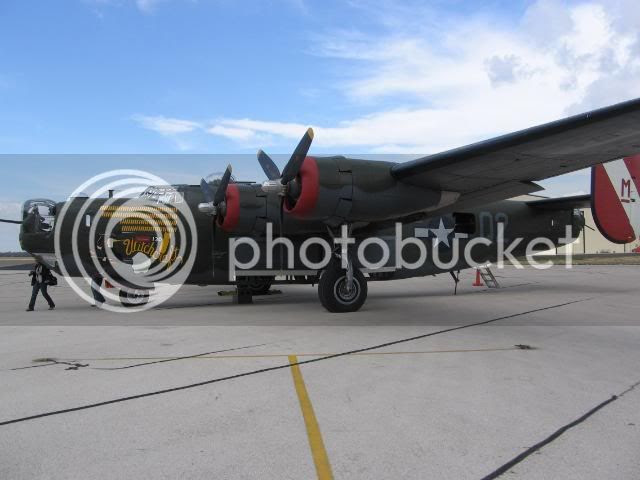 Enjoy this brief clip I shot of Betty Jane buzzing the runway!  (I used to have a super video of Ol' Nine 'O Nine, but sadly, it has vanished into the computer ether.)

Posted by Monkeywrangler at 8:07 AM 8 comments:

For those who saw my two posts for Leontien VandeLaar Oostdijck, know that she passed away last month after her battles with cancer.

I post these photos I took today, to share with her family and friends.  For even in the midst of winter's chill, there is still beauty to be found. 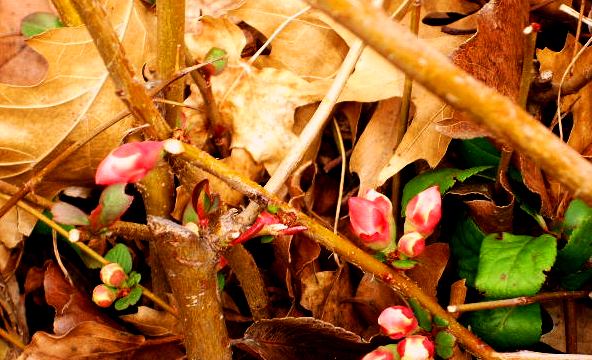 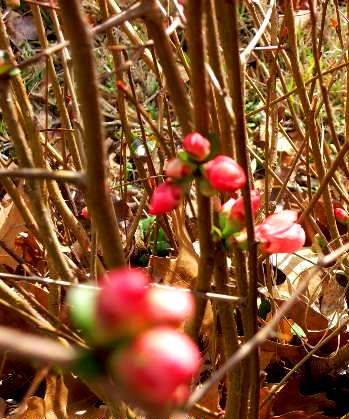 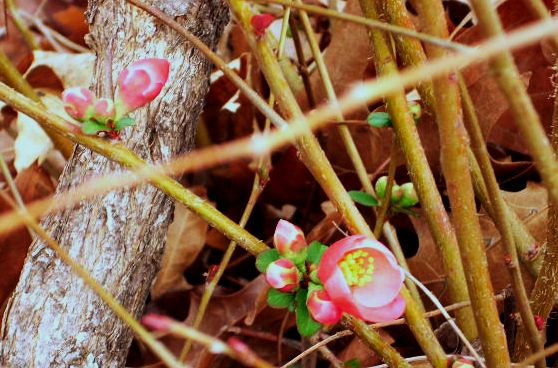 Posted by Monkeywrangler at 2:51 PM 5 comments: