Well, 2012 is ending in a few hours, and it has been an 'interesting' year.  Reminds me of the old Chinese curse, "May you live in interesting times."  But rather than focusing on the sad, and other darker thoughts of tyranny and oppression which I will leave for another day, I will just summarize my year on the bike.

Some of you may know that both Dave and I started riding in 2011 again, after a decade or so off the bikes.  I converted to a recumbent, a Bacchetta Giro for me ultimately, and both a Giro and a DF bike for Dave.  I have truly enjoyed the bike this year.

I acquired the Giro in March 2012, on the secondary market.  It was an excellent choice for me, being able to accept both 26" and 700c wheels.  After Dave built up a set of 700c's for himself, I swiped the "whitewall" wheelset of Velocity Deep V/DeoreXT's for myself on a permanent basis, nicely set up for disc brakes. 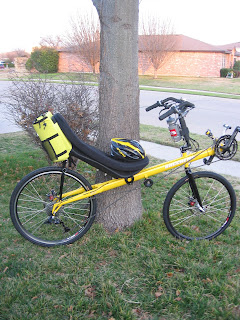 I did not start out with much of any goals for cycling in 2012--other than a desire early on to start randonneuring.  I failed in that--after a bad start on 1/1/12, where I was sick enough to call it walking pneumonia 2 days later, I lost interest in randos, sadly.  My only other goals were to do a few t-shirt rides (pay rides, often in support of some cause, where participants get a shirt for their entry fee), and to complete an Imperial Century (100 mi ride).  In both of those goals, I did succeed!

The rides I did were all good ones--well organized and supported.  Ride Ataxia, Ride for the Heroes, Tour de Paris, Red River Rally and the Denton Turkey Roll.  In 2013 I am scheduled to do the rides Dave did in 2012, namely the Muenster Metric, Collin Co Classic, Hotter 'n Hell 100 and maybe one other.

For 2013 then I have actually set a couple goals.


1. Ride at least 3000mi in 2013.
2. Work on my overall speed.
3. If I can, push for 4000mi riding.
4. Continue having fun riding.
There are  a couple other goals, but they are not bike-related.  Now that my disc brakes work well (thank you Mark at Cadence Cyclery!), I hope to hit all the above goals, and perhaps more!  I hope to see more of you out there riding too!  So if you see the Yellow Peril rollin' along, do say hello, as you cruise by.

Tailwinds everybody, and Happy New Year!
Posted by Monkeywrangler at 1:05 PM No comments:

Yes! A white Christmas for the Monkeys! I wonder how much we will get? They are out back playing in this rare treat.
Stay safe out there my friends! 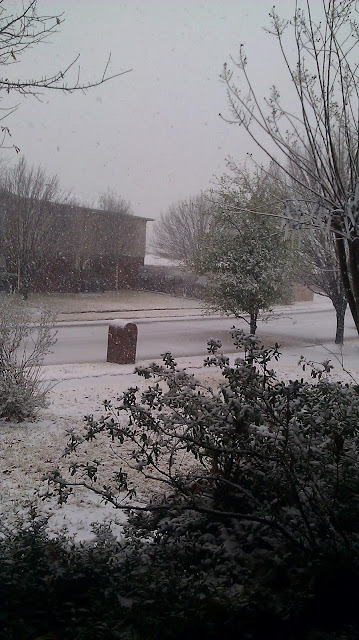 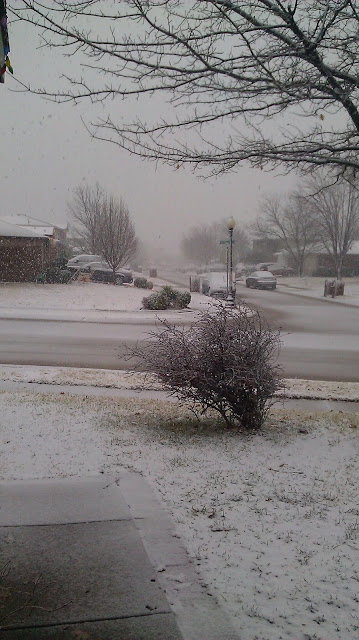 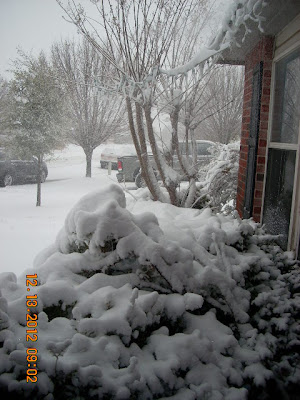 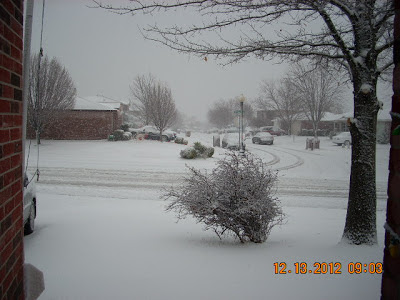 Posted by Monkeywrangler at 2:17 PM No comments:

You wouldn't think that getting woken up by the thundering herd of Monkeys at around midnight, 03:something, and 04:55 would be a pleasant experience on what is technically, Christmas morning...but it was!  Partly due to their unrestrained joy, and mostly due to the lovely thunder and lightning I was also greeted with several times during the wakeful moments.

Yes, a wet cold rainy wonderful Christmas is mine!  It is raining here in NTX, finally.  It rained slush earlier for a brief downpour, and currently is settling into a nice steady fall.  We need it badly here.  Enough so, that I do not mind the fact that the dogs will all have Monster Feet today.  3/4" of rain so far on the weather page I use.

It gets even better, maybe!  We should have snow falling by this afternoon, or so the weatherguessers say.  It'll be too wet and muddy in my backyard for the Monkeys to go out and play in, and we are not supposed to see more than 1-2" here.  But still, it rarely snows in DFW, and even less frequently on Christmas day!

The ham-bone is boiling on the stove for Ham & Bean soup for Christmas dinner, following the sausage, biscuits and gravy breakfast.  I might even get inspired to bake bread...maybe!  It should make for a pleasant Christmas meal.

The weather in your AO might be frightful, and this big ol' storm is supposed to wreak havoc on other parts of the country.  So stay safe, and if you don't have to go out in it, don't!

Merry Christmas, everyone!
Posted by Monkeywrangler at 9:35 AM No comments: 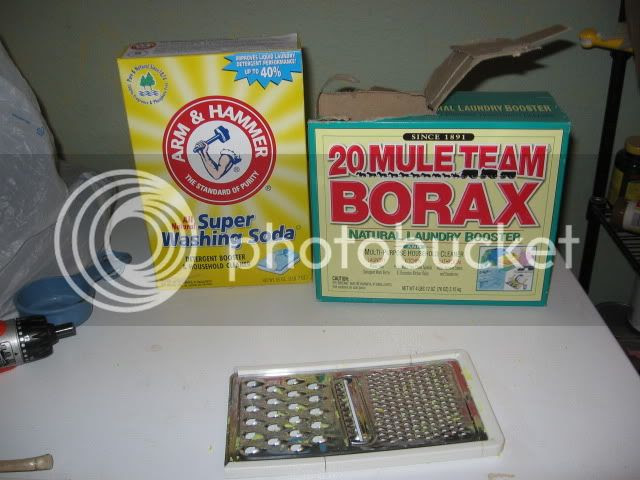 Have you ever gotten tired of paying a fortune for laundry soap? Do you have a front loader and have to use low-sudsing expensive HE soap? Well, both those statements apply to me, and so whilst perusing an online forum I stumbled across a recipe tutorial on how to make your own gel laundry detergent for cheap.

I watched the video a couple times, and thought, "Hey I can do that!". So I went out with Monkeys in tow this past week and bought my supplies.
You will need:
1 box Arm & Hammer Washing Soda
1 5 gallon bucket with lid
1 box 20 Mule Team Borax
1 bar Fels Naptha soap
A measuring cup, a wisk to stir with, a pot to boil in, water and a cheese grater.

First take the bar of Fels Naptha and the grater and grate the soap all up. You can use either the large grate or small, it doesn't really matter. While you are doing this, put 4 cups water in your pot and bring it to a boil.

Now add your grated soap to the pot of boiling water slowly, and stir with your wisk, until the soap all dissolves. When you are done, it will look like this. 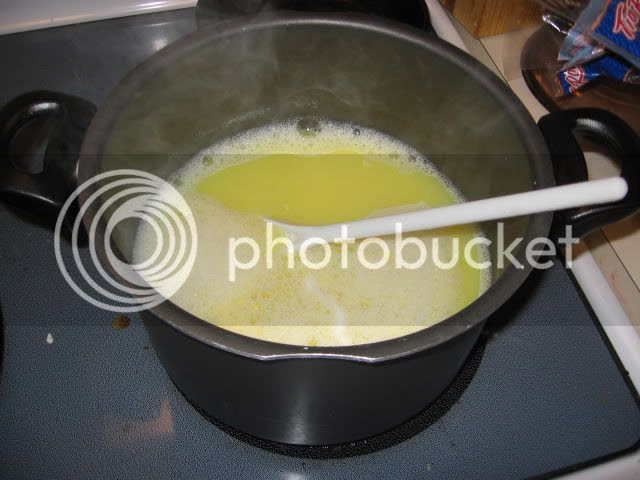 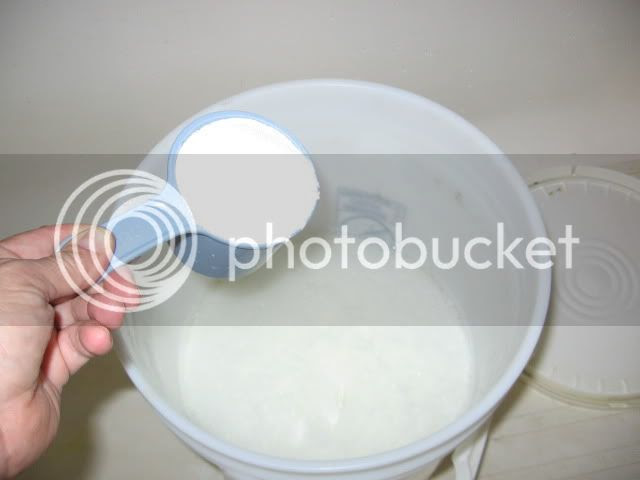 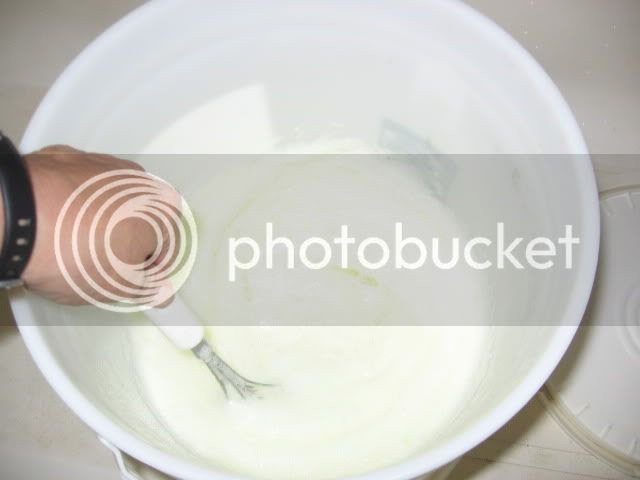 Once you have mixed it well, then you fill the bucket to about an inch or two from completely full, and stir some more. Then seal the lid on top, and let it sit overnight to cool and gel. When you check it the next day, it will be a semi-firm gel that stirs easily by hand and re-liquifies as you stir it. Mix it well, especially from the bottom up, as the particulates can settle a bit. 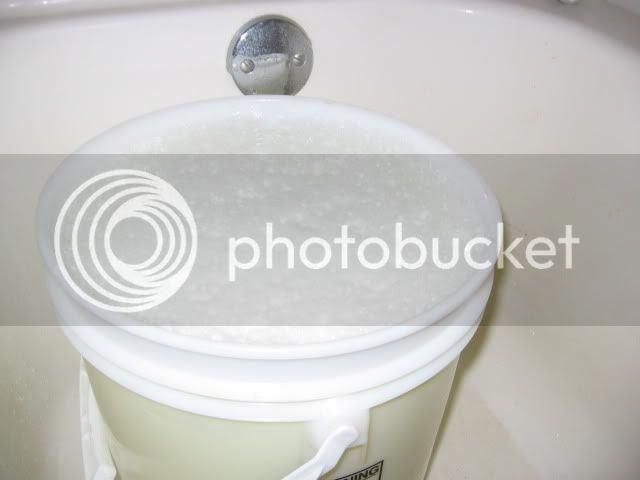 Now all you do, is take your dispensing container (old laundry soap bottle is perfect), and fill it half full of the gel goo. Add more water to the bottle, till full, and shake well. Measure out 1/4 cup of the diluted soap mix for a full load of laundry, and wash! This recipe will yield approximately 10 gallons of laundry soap!