Eagle Rare Bourbon sponsors an annual award of significant dollar value for the honored recipient.  Many are nominated in a variety of categories, and one is chosen per category.  The voting runs for a long time, to give more people the opportunity to participate.

This year, a good friend of mine, is in the running for the Character Award.  He is Roy Hughes, founder of Texas Independent Rhodesian Ridgeback rescue, aka TIRR Rescue.  I know of no one, more dedicated to the dogs he has contact with, than Roy.  I know first hand, the energy and resources he pours into TIRR, his life's work.


I know this, if Roy were so fortunate as to receive this award and the funds it comes with, that money would all go to the dogs care and housing.  I know it would be well spent.

If you would be willing, follow the link below to the voting.  You can vote daily, from any device you have, for the duration of the voting (which is long).  Once there, you can bookmark it on your devices, or just refer back here to get the link again.

Looks like I will have a busy week next week, what with MonkeyBoy's birthday, and DH's impending hand surgery, plus our foster dog Sarge came up lame this morning for some reason.  I'm currently waiting on the vet telling me what time they have time open to see him today.

So yes, it will be busy next week.  MonkeyBoy is growing up fast.  He finally hit a growth spurt, and got longer rather than wider.  He's still not quite as tall as me, or his younger sister, but I seem to have to keep buying him longer and longer pants!  He is also maturing nicely, though at times he needs to rein in his temper.

Stenosing Tenosynovitis is the official name for what is wrong with DH's hand.  Two fingers on his dominant hand are currently affected.  For some reason, this problem is overly common amongst diabetics.  I can't learn of a good reason why this is so, only that it IS a common complaint.  Also according to our favorite Orthopedic Surgeon, diabetics just do not respond well to non-surgical treatment (aka cortisone shots).  He says every single diabetic who received a cortisone shot was not fixed.  Yet only one surgical treatment that he has done had the problem recur in the treated finger.  We are well aware of how cortisone affects blood glucose (badly!), so we did not consider that a viable option anyway.

His surgery is late next week, so if you are so inclined, I would appreciate any prayers you care to utter for DH, and those involved in his care and treatment.  I trust his doc, lord knows I have enough scars to prove that!  And though it is a minor surgery, it still carries risks, especially as a diabetic.

And then there is poor Sarge, our local foster pup.  He came up very lame this morning.  Bad enough that he clearly does not want to bear weight on that front leg.  I don't know exactly what he did to it either...he seemed normal last night when I crated him for bed.  At least he will get to see a vet today or tomorrow I think.  The local shelter has approved a voucher for his treatment.

Then there is the normal household stuff to do, plus planned lifting M-W-F, plus maybe a short bike ride or two...I expect next week I will feel like I'm running around like a chicken with its head cut off!

UPDATE from Saturday:  So today we tackled replacing the main pump motor for the pool.  Thank God for Youtube!  It wasn't technically difficult, really, but there are some parts you DON'T want to break!  (Can you say impeller?)  Plus the videos were not an exact match to our system, but we managed, and once done, we got to do the leak check.  Powered up the motor, and voila!  No leaks, no howling bearings, and a whole lot more water flow through the system than before.  Yay!

Then it was time to chainsaw more logs to size, and split and stack them all.  At this point, we need to gravel in the remaining wood pad if we are going to split more wood.  We got about two hours of work done on the wood pile before we were willing to call it quits for the day.
Posted by Monkeywrangler at 10:14 AM 1 comment: 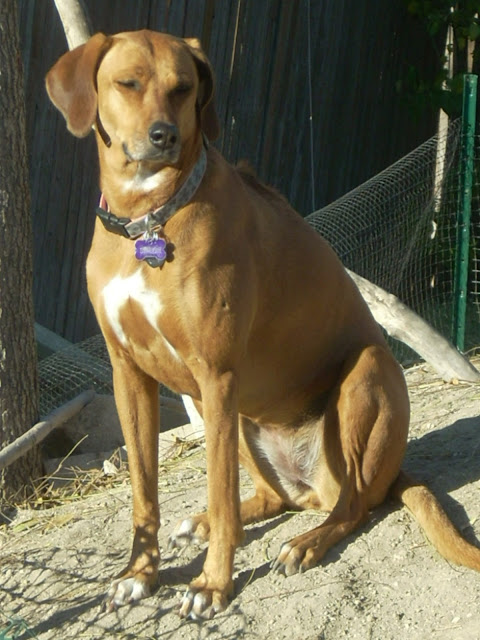 Posted by Monkeywrangler at 4:32 PM No comments:

Saturday, DH and I decided to go all the way back into the Metromess (my 3rd trip in the week!) to go to the KBH Convention center for the EuropaDallas 2017 Fitness Expo.  Neither of us had been to this sort of convention, though we have been to numerous other conventions in our lives.

None however, were quite as noisy as the Europa!  OMG, was it LOUD in there!  Between the annoying Rap Music blasting out of vendor booths, the dance stage music trying to be loud enough for the dance crowd to hear, and several thousand people having to yell across tables just to converse, it was a darned good thing DH didn't wear his 'ears', or what little hearing he has left, would've been gone! (His 'ears' are mainly amplifiers, without the ability to cancel out unwanted noise.)  Seriously, it was so loud, you could've fired a pistol in there, and no one would've been the wiser!

The vendors were mostly well represented, with lots of protein/food/clothing sellers.  The glaring gap in vendors was the hardware sellers.  Only Troy Barbell and Inzer showed up.  We had hoped Rogue, and Texas Barbell would show, but no joy.  There were some other sellers of wraps/sleeves/belts, but none I had heard of before the Expo except Inzer.

I had been looking for a set of knee sleeves or wraps, as my right knee is no longer 100%.  My doc says I can have a new knee in another 12 years, as I am approaching a bone-on-bone situation on the medial side.  After seeing a Rippetoe video on using wraps, I decided I would try those instead of sleeves.  Sleeves are faster to put on, but the wraps are infinitely adjustable.
I found the Inzer booth at the Expo, and opted for a set of their Gripper wraps, so there would be less slippage of the wraps in use.  I was hoping for some improved support for my knee during squats.

I got to use them last night, during our lifting session.  All I can say is "WOW!"  I did not expect the amount of support I got from a medium tight wrap!  At first it was sort of like walking around with what I called 'robot legs'.  It felt strange, not bad, just odd.  Then it was time to squat.  It made a huge difference in my stability!  I was sold on them after the first set!

DH thought he would try them too, just to see,  He doesn't have any big knee problems, his issue is a very cranky hip.  So when it was time for his squats, we got him wrapped up.
Posted by Monkeywrangler at 6:27 AM 1 comment:

Two weeks ago, Monkey1 spotted an advertisement in the local classifieds.    "Free firewood.  Must take it all.  First come, gets it all."  Well, not being one to turn down free firewood, we drove out that same evening to see how much there was, and whether we actually wanted it.  The wood was two loads worth in the truck, and not horribly rotted out, so we agreed to take it.  The landowner was prepping his home for sale, and we happened to spot that he had an hydraulic splitter in back.  Casual conversation ensued concerning said splitter, and it was found to be in pretty good running condition, starting up readily.  A price was negotiated, and a payment date agreed upon. 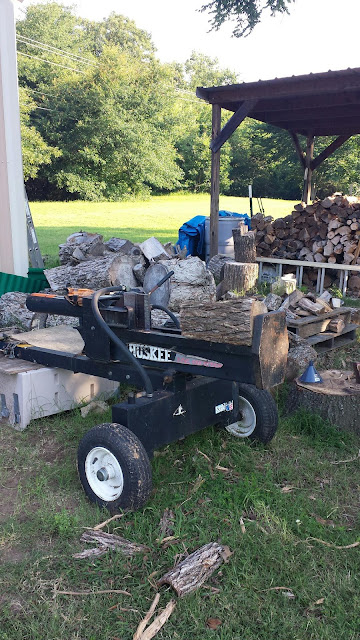 A Huskee hydraulic log splitter, either 22 or 22 ton, we're not sure which.  It could stand new wheel bearings, but the motor and ram are in fine condition, so the wheels can wait.

This weekend was planned to be a working weekend, splitting and cutting  and restacking our existing wood pile.  Much of what we had previously cut and split is too long for our new wood burning fireplace insert.  We are standardizing on 16" logs to make them more manageable in the insert.  This will be our heat source in the coming winter/cold seasons. 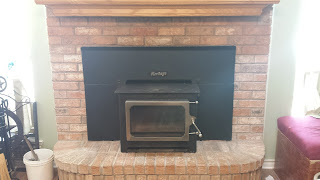 This was the initial pile to split.  I was going to run the splitter, with Monkeyboy managing the logs.  Once split, it would be carted over to the main storage pile and stacked neatly...something that needed done with the entire split pile if truth be told. 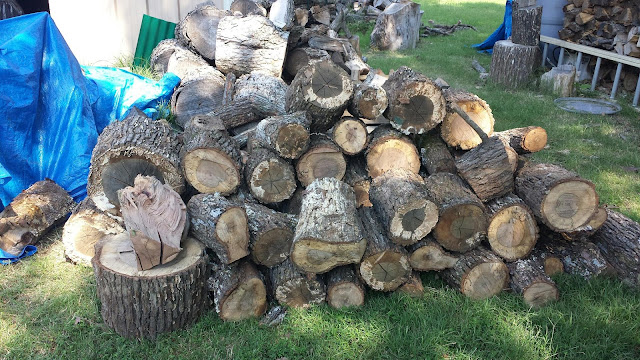 DH was going to run the chainsaw, shortening logs to 16".  This is his work area.  Monkey3 would be helping him.  Their working stack of logs is shown below (2nd picture).  The splits you see are ones that need to be cut down to 16", and possibly resplit to a more manageable size. 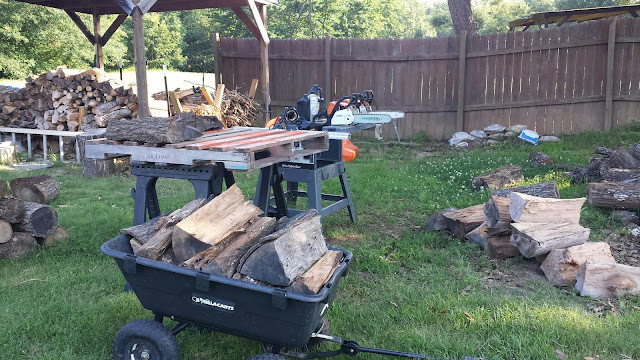 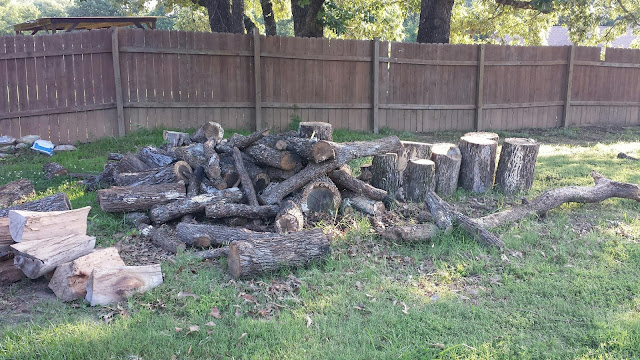 After about two hours running non stop, the pile of logs needing to be cut down looked like this.  We made quite a dent in it! 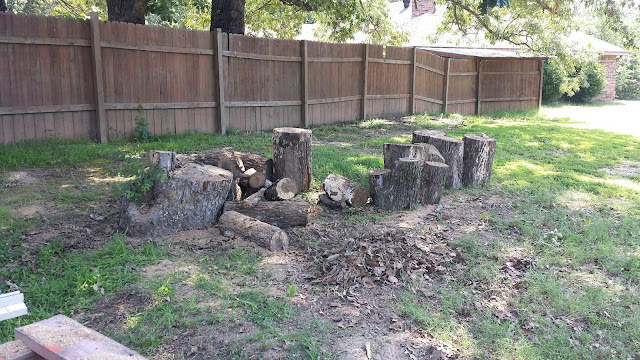 We also got quite a lot of it split and stacked.  You can see the change in the woodpile by comparing the two photos below.

There remains quite a lot of work yet to do, but we did make a lot of progress today.  And, neither DH nor I feel like we got beat to death doing the work.  That alone makes the investment in the log splitter WELL worth the expense.  And to be honest, we paid less than 25% of the cost of a new one.  Some folks might call it "cheating", but I'd call it "working smarter!"
Posted by Monkeywrangler at 1:19 PM 2 comments: