Our newest dog Shiloh so far has only one minor flaw...she is a bit of a digger.  She has her hole dug under the deck, and a small scratch pit in front of the deck, but other wise has not been known to dig random craters in our yard.  That special task is reserved for the Monkeys!

Still, as we learned with our above-ground Intex pool, a level surface is essential for good pool management.  So we have begun the task of digging out a pad to back fill with sand to level and re-establish the pool upon.  This necessitated digging out a 12x12'x4-8" area.  As the ground had settled over the years from around the storm shelter, we opted to relocate the moved dirt to the shelter sides.

Shiloh was displeased!  She likes to lay on the mound and survey her domain.  We covered up her favorite spots with loose, Texas clay and caliche.  Then it rained Sunday night...She was outside later to do her business, and this is the result.

Shiloh is fussy about her feet.  She hates having her nails ground down, or her feet handled.  Apparently she also hates mud between her toes! 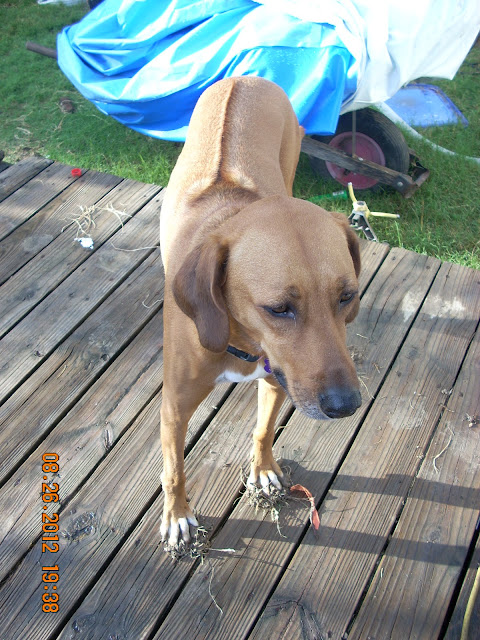 I have never seen her look more dejected!  It was worse for her, knowing in her doggy mind, that this would entail much paw-handling. 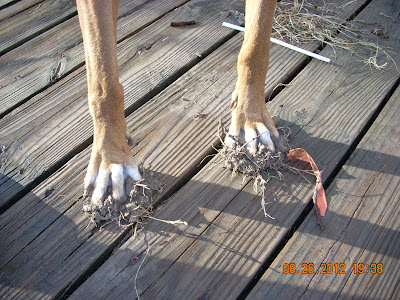 Dave laughed so hard, and of course sent me for the camera to record her misery. 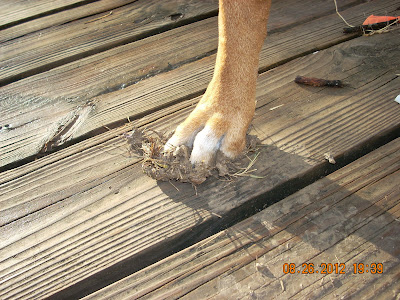 Dave got her cleaned up, with much distress on her part, but I did note that early the next morning, when she was nearly as muddy after her morning constitutional, that she permitted me to clean her paws without ANY fussing!  Of course, I did reward/bribe her with a slice of cheese...
Posted by Monkeywrangler at 1:43 PM No comments:

I have always depended on the kindness of strangers....

Well, not really.  That's not my style or temperment.  So when I find my pessimistic worldview tested by kind strangers, it is always a pleasant surprise.

Twice in the last week, I have been on the receiving end of unexpected kindness.  First, was when my Mom, the Monkeys and I all went off to Half Price Books to do a bit of shopping.  As I was checking out with a wad of reading materials and Monkey DVD's, I asked the cashier if they had any discount coupons (I had seen one on the counter that was not yet 'active').  He said sorry, but no.  And then the lady behind us in line chimed in, with a "Yes I have a spare coupon you can have."  Out of the blue...it was even a big coupon too, maybe 15% off total IIRC.  I thanked her profusely.

Now onto today's kindness...Dave went with a mutual friend up to Wichita Falls for the Hotter 'N Hell 100 bike ride.  While there at the staging area early this morning, Dave apparently set down his smartphone.  Then he went for a ride, leaving said phone behind.

Apparently a young man spotted it and picked it up with the intent to turn it in as lost, and forgot.  Dave did the 100mi ride, but the young man did the 25mi ride, and so finished hours earlier than Dave.  I had noticed Dave's phone had magically transported itself to Saginaw TX, which is nowhere near the HHH100 route...Puzzled, I assumed it was a typical GPS glitch where the tracker will log you in another state for a brief time.

Dave called, and had me brick his phone remotely (temporarily).  Just after doing this, the young man called MY phone, and told me how he had found the phone sitting there, and forgot to turn it in.  He and I talked a bit, and he said he would take it to work Monday morning, and I could pick it up at the front desk.  Sweet!  I know who/where/when to pick it up.  I should be able to unbrick it.  I can get it back to Dave later on Monday.  Life is good!

Two people, through small acts of kindness, have helped me remember not everyone out there is part of the "ME ME ME, I I I" crowd.
Posted by Monkeywrangler at 4:25 PM No comments:

Yeah, no riding for me for at least a couple days.  Diverticulitis flared up yesterday and the pedalling motion is just plain painful!  I'll be on a couple meds for a week or two (blech), but once the pain is gone I do plan to ride.

In the meantime, I suppose I could do a gear review or two maybe...
Posted by Monkeywrangler at 6:02 PM 1 comment:

Yesterday was the annual Red River Bike Rally, at Pottsboro, TX.  I looked to be an interesting route, in areas I was somewhat familiar with, though I wasn't expecting all the hills.  See, the route was designed by a local Randonneur/RAAM veteran, who I think loves hills!  He sure found some good ones!

The weather was better than I had hoped for.  Light winds, and cool-for-August-in-Texas temps resulted in a pleasant and fast moving start to the ride.  I did forget to start the GPS for almost a mile, but at least I remembered to turn it on eventually, so I got a good record for the ride.

The routes (there were several distances one could choose from) were all well marked with color-coded arrows on the pavement, and what I found especially nice was the road-hazard markings that the organizers put down (marking large cracks in the road, loose gravel, and loose dogs for example).  It was a welcome touch for rider safety.

The 60-83-100mi routes all stayed together for close to 30mi, when teh 60mi route peeled off.  That left just the 83 & 100mi routes.  I was going great, until about mile 42, when suddenly it felt like somebody kicked the legs out from under me.  My legs went from fine, to feeling dead and flat.  I knew it wasn't a food/hydration issue, as I had been eating well, and drinking lots.  I thought about it a bit, and it dawned on me, that 40mi is my typical "long" training ride on the weekends!  My legs were trying to tell me I was supposed to be "done" at 40mi.  Silly legs...there's 60 miles to go!

Temperatures began to warm up after lunch and I came at some point to the proverbial Fork In The Road.  Yes, this was the point where the 83 mile route split off the 101 mile route.  I stopped in some shade and pondered my fate.  I knew if I went 83mi I would be done about 90min sooner at least, and home that much sooner too.  But on the other hand, the weather was good for August, and my legs were feeling better by then.  It could be the best shot I had at getting a full century ride in, with SAG support, before the end of the year.  I chose to try for the century.  Now most folks chose 60mi or less.  At one of the later rest stops, the volunteers told me I was only rider 66 through there.  If memory serves, that was before the 83mi route split off.

As time moved on, and I continued on down the road, it was getting later and later in the day.  The ride had started at 7am.  The volunteers were wanting to get done and home too.  Being one of the last riders out on the long loop, I was graciously granted a follow-vehicle to haul water/ice and to offer to SAG me if I decided to quit.  Never having had my own personal SAG vehicle, it kept reminding me of Dex Tooke's story of his RAAM ride with his direct-follow support van!  Not that I am anywhere near the class of rider like Dex, not by any stretch of the imagination!  But it was still pretty cool!

The miles kept ticking off, and eventually I saw the parking lot where the Honda was.  My follow-car pulled off in a different direction, so I never got a chance to thank him for looking after me.  The Grayson Co HAM crew was great!  THANK YOU ALL!

As I pulled to a stop by the car, the GPS said it all-- 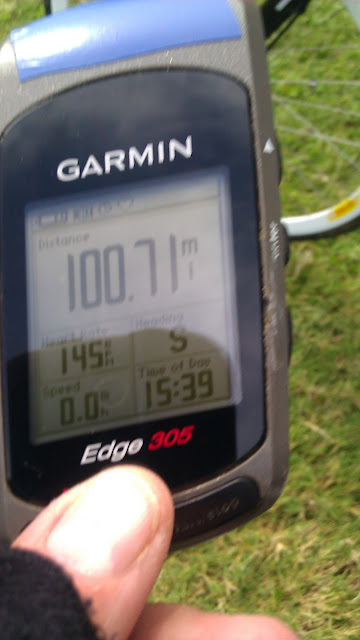 
My total time from start to finish was 8hr 35min, with 7hr 44min of that being time spent riding.  My average speed overall was 13mph.  This was the first century I have ridden since 1997, I think...It's been a few years, eh?
Posted by Monkeywrangler at 8:24 PM 1 comment: