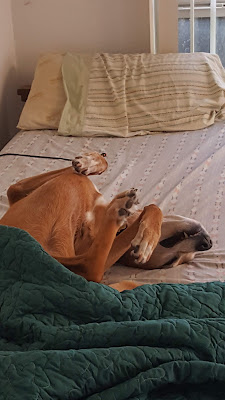 Shiloh, our senior female Ridgeback is spending her final night with us, resting quietly on our bed.  Ever since her diagnosis, she has decided that our bed is no longer off limits.  Neither DH nor I were inclined to boot her off either.

The cancer has been as aggressive as we feared.  It's 3x as large as it was back in Feb, when we had most of it surgically removed.  The cancer has stolen every ounce of food, and every ounce of flesh from her body.  Despite being fed as much as we can get her to eat daily, she is starving to death before my eyes.

I had to go out of town this past weekend.  My fear was she would pass on her own, leaving DH to deal with it on his own.  I made a deal with Shi before we left--if she would hold on until we got back, I would make sure she didn't suffer longer.  So, we have an appointment tomorrow with the vet, to grant her that release.  Though she doesn't seem to be in pain, I know she is no longer enjoying life. I am well familiar with how well Ridgebacks can hide pain, but she isn't exhibiting any of those tricks. 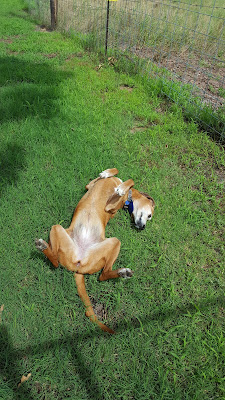 Posted by Monkeywrangler at 7:53 PM 4 comments: