What is the sound of a 17yr old dryer? 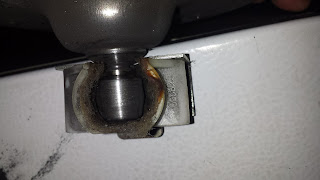 The question of the day is "What sound does a 17 year old Kenmore dryer make? "

Answer:  You might describe it as the screeching cube of squeezed cats.  Or perhaps the shriek of tortured metal that refuses to die?  Either way,  it was positively painful to be in the house while it was running!

Being who we are, neither DH nor I are unwilling to get our hands dirty, especially if it saves us some coin.  We bought our dryer back in 2000, when we bought our first home together.  The washer long ago succumbed to its age and wear despite our efforts to keep it running, as did its replacement.  But the dryer ran on, and on, and on...

Periodically it would get noisy, a squeek that usually meant the felt  and teflon glides needed replacing.  This also afforded us a chance to vacuum out the 17 dogs worth of dog hair that seems magnetically drawn to the inside of the dryer.

About a year ago, we ordered a new repair kit, from Repair Clinic.  It is a great resource for appliance repair for the do-it-yourself crowd.  Between their onsite videos and Youtube, you can get instruction on how to fix just about anything appliance-wise!  We had some trouble installing the felt and glides last year, so when our dryer began to make screeching howling noises early this year, we assumed the felt and glides had shifted and that the drum was rubbing on the frame, causing the cacophony.

We were wrong.  The felt and glides were fine.  In fact the unorthodox adhesive worked very well, so what was the cause of the din?  Below is shown a new drum bearing plate.  This is the point around which the drum of your dryer spins.  It rides in a sheet metal and nylon race, bolted to the back of the dryer box.

When we opened up the dryer last night to install the new felt, this is what we found.  This was the bearing.  Note the distinctly different shape to the bearing surface! It was sitting inside what was left of the metal and nylon race.  The nylon race was totally destroyed.  The metal housing for it was heavily damaged too.
Houston, we have a problem!  Yes, this was the source of the screeching metal howling box of death-metal cats!  Since we had the dryer all apart anyway, we replaced the drive belt, the belt tension pulley, and of course all the parts destroyed above.

Cost of a new dryer from the store: $500+
Our Do-it-yourself costs:
One repair kit from Repair Clinic: $37.91
Cost of the lesson in do-it-yourself work for the kids: Priceless!

Oh and now my dryer doesn't howl either!
Posted by Monkeywrangler at 5:30 AM 1 comment:

First there was a big, Bullet-sized block head shoved into my lap.  This was followed shortly by a tentative paw... or two.  Just testing the waters, seeing what he could get away with.  Suddenly, all 4 paws were on the couch, with the back two firmly settled on to/in to, my thigh, and a dogbutt in my lap.
Thus, the evolution of the Mom-chair! 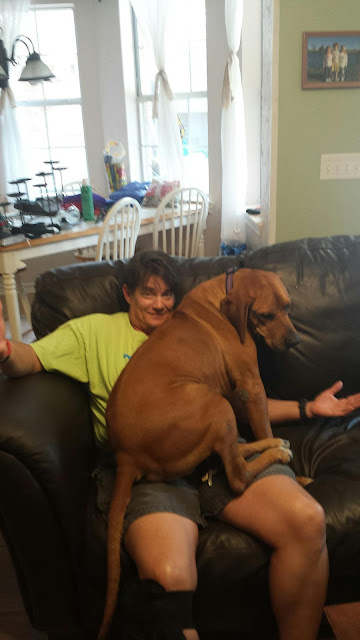 Posted by Monkeywrangler at 7:36 AM 4 comments:

A new beginning, for Bullet 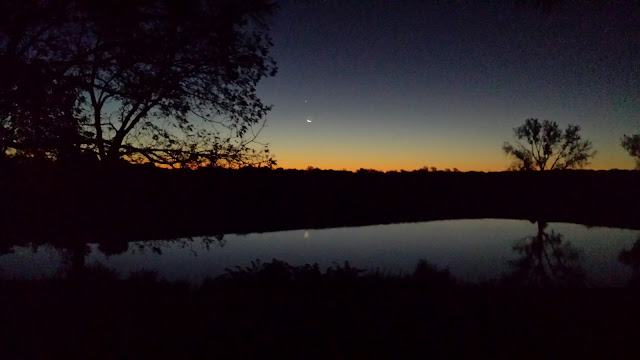 Sunday, following our vacation to our secret little spot of Heaven on Earth with hungry bass, DH and I drove to TIRR Rescue to pick up our two remaining dogs Shiloh and Indy.  We had a plan, to talk with Roy there, about adding in a third dog, to fill the hole that Ranger left with his sudden passing away

We had already talked to our local shelter, and looked at their dogs available to foster, and knew that we needed to bring ours home first.  It can be hard, walking away empty handed, from a kill shelter, but we knew it was what we had to do.

When we arrived Sunday morning, there was a joyous reunion with our two.  Indy spinning and dancing all over the place, unable to focus on one human to lavish his affection on.  Shiloh, ever-in-control, went all wiggle-butt when she saw DH.  He is her favorite human.  Such a Daddy's Girl!


When they had finally settled down, we went to the kennel with Roy to talk dogs.  We chatted a lot, and then went to see three dogs, in depth.  One, a handsome young male, just was not ready to adopt out.  There had been some "issues" when he was with Animal Control, and Roy wanted to give him time to adjust to being at TIRR, and to see how he behaved.  Another, was a dog with some separation anxiety.  Not uncommon in dogs, but this boy just didn't click with either of us.  He was fine, around our two dogs, but that was because he was ignoring them.  He really just wanted to be back in his run with his pack and best buddy.  Lastly, we saw a bit older of a dog.  We thought he was about 5, from looking at him.  He was a stockier build, almost the same size as Indy, with the same sort of block-head.  He really looks like a throwback to the early version of the breed. (Yes he is a purebred Rhodesian Ridgeback.)  His name was Bullet.

It turns out Bullet came into TIRR from a west Texas animal shelter.  He seems to have been a ranch dog.  He is clearly familiar with horses, and undisturbed by them, nor does he harrass them.  He is also, according to the paperwork Roy has on him, 8 years old next month, and was an owner surrender and seems to have always been named Bullet.  For those who know us, I sort of thought that was a sign...  He had been at TIRR for 11 months.  He had been to adoption events as recently as Saturday, but had a history of "not showing well"  because he would get upset when other dogs came near his crate.  Humans by his crate were just fine. 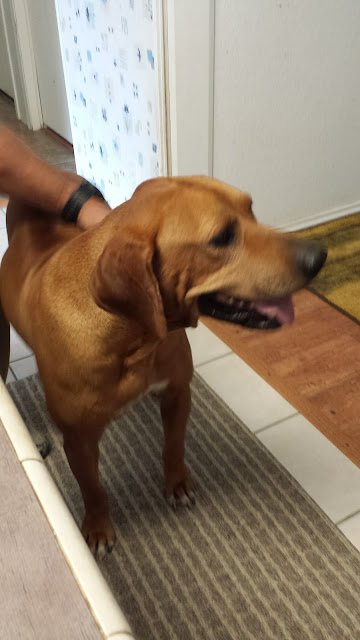 Bullet clearly likes his humans.  He is friendly and enjoys soaking up attention. He got along fine with our two, down at the kennel.  Not being sure of his past, we assumed he was not housebroken.  That in itself is not a dealbreaker, as we have tile and laminate flooring, not carpet.  So we took him over to the house at TIRR, to see how he behaved inside a real home.  And of course, he tried to mark a couple walls!  BUT, the important thing is we were watching for that behavior, and caught him in the act, and verbally corrected him, and he STOPPED!  Pretty soon, he flopped on the floor not far from Indy.  Periodically he got up, and made the rounds of available humans, for ear scratches.

So, we have a new family member!  Bullet has joined our pack. It feels good, to give an older dog a chance at a new beginning, with all the comforts of home.  He has been accident free so far in the house, and has already graduated from sleeping in the crate at night to sleeping on Ranger's dog bed in our bedroom.  That took a whopping 24 hrs!
And like all our Ridgies, he is enjoying the pool deck.  It is their favorite place to do their solar recharging. 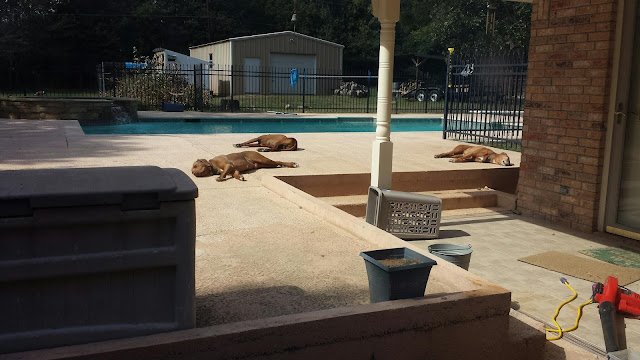 Posted by Monkeywrangler at 2:57 PM 5 comments:

My dear sweet dog fish Ranger, died unexpectedly today.  He was only 4. 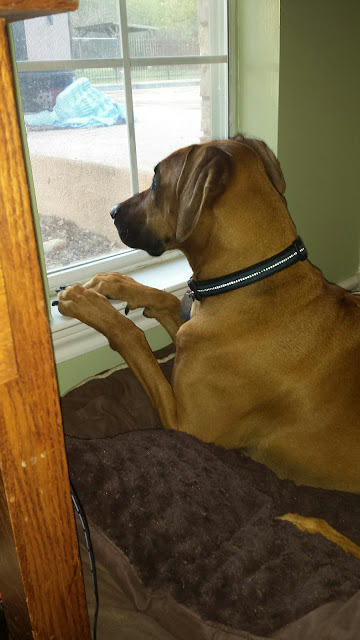 Posted by Monkeywrangler at 10:04 PM 7 comments: