Ouch...it's been 9 months since I rode anything other than a carseat any distance.  But this week, Monkey3 kept asking me to take her on a bike ride.  As it was somewhat cooler this morning I conceded.  The kids prepped the bikes, and off the three of us went, to ride the neighborhood.

Even after living here just over two years, there were a couple side streets I had never been down.  So since I was ostensibly leading this ride, I decided to explore.  We ended up riding down all the roads in the neighborhood.

It was fun...and mildly painful.  I rode my Specialized Roubaix, an upright, not my Encore recumbent.  The roads here are a bit narrow, and the Encore has a relatively large turning radius.  And I'm just a wee bit out of practice.  The Roubaix makes my hands hurt, my shoulders hurt, and my sit-bones hurt.  The sit-bones would stop hurting if I rode the bike enough, but not the hands and shoulders.    But for short rides, it can be fun.

Seven miles later, at a ridiculously slow sub-10 mph, we made it home.  No flats, only one minor crash for Monkey2, and zero traffic.  Maybe, just maybe, I will start doing the Gate 2 road ride.  It's just a little bit longer, and the roads are generally in better condition than those in the neighborhood.  It would be good to get back on the bike again, even if it is just for 10-20mi rides.
Posted by Monkeywrangler at 10:34 AM 1 comment:

A bit of a family tradition here from my husband's side of the family.  On Mother's Day, the family takes Mom out fishing.  My mother in law loved to fish, and so do I.  As it happened, it was not convenient to go fishing until last evening.

We hit the farm ponds by 5pm, so the sun and heat were not killer.  There was a decent breeze, and we saw submarine cows in the pasture.  The burro herd even decided to do their own version of the Belmont Stakes, with one braying beast, chasing another around the 90 acres twice!  Those little buggers have some stamina!  Sadly, I was laughing too hard, and having too much fun fishing, to try to take any burro race photos.


After landing fish #1 in about 15 min, the fishing sort of slowed to a dead stop.  Or at least the catching stopped!  Eventually MonkeyBoy hollered "Fish On!" and brought in a fat bass.  He was too far away to get a photo though.

I wandered over to the second smaller pond, which DH had tried unsuccessfully earlier.  I too, had no luck in the small pond.  This was a little odd, as that pond is usually good for a couple large bass, like 7# sized!

I returned to the large pond, in the corner by the dam, where there was a tree shading the water.  I've had success in the past, fishing the shadow-line on hot days.  Yesterday was 90* at 5pm.  It didn't take too long, and #2 was on shore.
Shortly after that, #3 and #4 decided they wanted a chance at a plastic worm.  Their wishes were granted, and they were released with the others.  Next time we go fishing there, I'll try for the morning, so we can bring some bass home and fry 'em up for dinner!

I gave up my hot spot after than and went to sit in the shade of the truck.  Not too long after that, DH came up, somewhat overheated, so we packed up and stopped at DQ for a soda and shakes for the Monkeys.
Posted by Monkeywrangler at 11:34 AM 2 comments:

This past Saturday, we were treated to a visit to the Flying Tiger Airport, west of Paris, for their 2018 Fly-In.  It was in celebration of the nearly complete restoration of their AF-2S Grumman Guardian.  She'll be in flying condition in another month or so, and will be the ONLY flyable one in the world.  Here.  In the middle of almost-nowhere Texas!
The owner of the airport has several warbirds of his own, including the SNJ-Texan, and others.  The event was free as was the food!  There were bounce houses for the little kids, and a ton of other aircraft to look at.  They had a great turnout, both in fly-ins and car traffic.
We had fun, looking at all the planes and hearing various stories of this place back in the 1970's and 1980's.  Apparently it was quite the place to see, and fly warbirds! 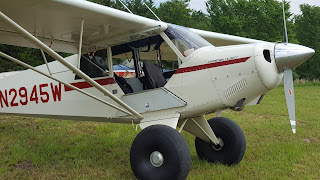 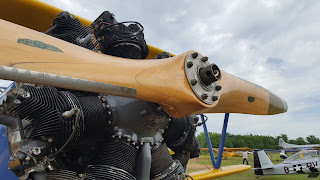 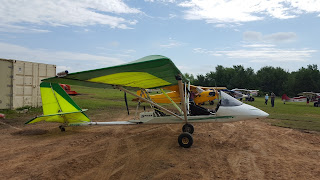 I hope next year, there will be more old warbirds to see, and maybe watch them fly!

Posted by Monkeywrangler at 4:18 PM No comments:

Our backyard flock has dwindled some, since inception.  Now, despite it being high season for eggs, we aren't getting enough to be able to share them with friends.  So off to Atwood's to see the baby chicks.
Atwood's gets chicks year 'round, and today they had some standard pullets (girls), and some rarer breeds in straight run (unsexed).  We got 2 Barred Rock pullets, and two Buff Orpington pullets, and then it got interesting.  The stock tank full of straight run chicks clearly had some interesting birds.  We opted for a total of three, all in the same breed family, the Hamburg chickens.
We are supposed to have a Gold Penciled Hamburg, a Gold Spangled Hamburg, and a Silvered Spangled Hamburg or maybe a Silver Penciled Hamburg.  I'm not totally sure!  They are supposedly a docile breed, if a bit flighty (sounds like our Brown Leghorn!).  We might need to clip their flight feathers in the future...and hopefully, they are all hens!  I really don't want to deal with a Roo.  But if we did end up with a Roo in the bunch, I should be able to trade him for a hen.
Since none of our hens went broody, we have to raise these new birds by hand, in the workshop.  Less convenient, but not our first chicken rodeo at least.
Yes the Monkeys have already named (with some editorial input from yours truly,) all the chicks.  The Buff Orpies are Cookie and Waffle.  The Barred Rocks are named after penitentiaries (because we nicknamed the Barred Rocks as jail birds").  And the tiny Hamburg chicks are named after missiles from the US inventory (past or current), Nike, Athena and Firefly.
Yeah, I know, we're an odd lot!  But it is rather fun, giving them names.  Hopefully the names will fit, once they're grown.  And if any of the Hamburgs turn out to be Roos, then they'll briefly be known as Hercules or Ajax (also from the Nike missle program).