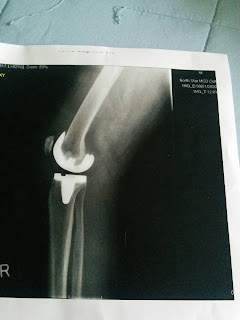 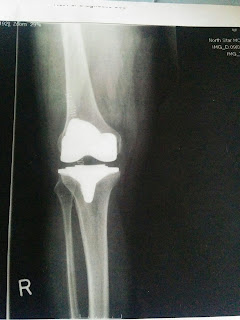 We are Borg.  You will be assimilated.

Aug. 19, 2020 I joined the Collective.  In Dallas, I underwent a total knee replacement surgery, aka TKR.  It has been an interesting journey.

It all started when I tore my medial meniscus in a church league softball game, somewhere around 2006, I think.  It was scoped, which seemed to fix things, but I was warned it would become arthritic.

Boy howdy, did it ever!  Ultimately I had tri-compartment arthritis, bone on bone medially.  This was making everything more difficult, especially when compounded by the pair of large cysts in the knee joint.  The cysts were restricting movement, and the smaller was causing a lot of nerve pain.  The cysts of course were driven by the arthritis.

I could've tried to just have the cysts removed but at least two orthopedic surgeons indicated it would likely return fairly rapidly, due to the arthritis, unless the knee was replaced.  Not wanting to undergo multiple surgeries for the issues at hand, I  went to see the surgeon recommended by both the other guys I had spoken with.  Dr. G. is an orthopedic oncologist.  No, I do not have cancer, but he is extremely experienced and skilled at digging unwanted things out of patients bones and joints.  He also does a lot of joint replacement and reconstruction, and revision joint surgery.  Dr. G. said he would not only remove the cysts, he'd do it during the TKR, and from the "front", eliminating the need to have a second large incision on the back of my knee.  YAY!

A date for surgery was set, rather far into the future, due to the Covid19 restrictions in place at the time.  I would've liked to have the surgery sooner, but coordinating family schedules, and Covid19, meant a longer lead time.

Above is the last photo of my original equipment knee.  Hairy legs and all, because they don't want you shaving before surgery.  Apparently not shaving lowers the bacterial count on the skin...and also keeps you from nicking your leg with a razor.  I remember being wheeled down a hallway toward surgery, thinking "Last chance to bail on this, kiddo!"  And then I woke up, in Recovery.  The pain, which was NOT well managed (my primary gripe with the hospital, really), was significant.  I try not to bitch about pain, but when it's clocking a steady 8-9 out of 10, there is a problem in my book. 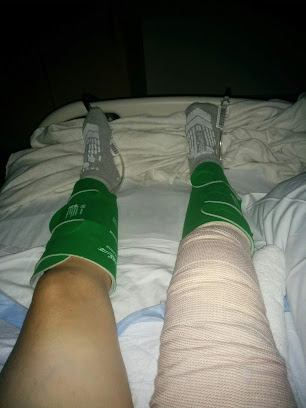 Two days in the hospital, connected to the green legging contraption.  It's a pressure cuff affair, designed to keep pushing blood around, so you don't get blood clots.  It would've worked better if the staff had remembered to turn it on after every time I got up...but in the end it worked ok, because I didn't develop any unwanted blood clots. 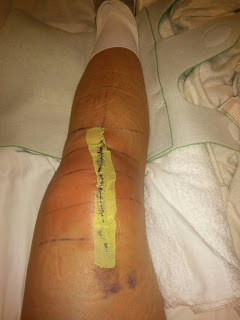 On the day following surgery, after having been up and walking on it, the LNP came by and removed the surgical dressing.  Other than being swollen, the knee doesn't look too bad.  All the purple lines, and the blotchy marks at the near end, are register marks and the "Cut this one" autograph.  The LNP put on a smaller silver impregnated dressing which was a lot more comfortable.  In the picture below, you can see both teh dressing, and the post operative bruising.  Yes, by that point, my right leg was about twice the size of the left! 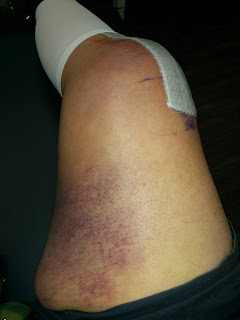 Rehabbing a TKR is a lengthy process.  The first thing they want you to do, besides walk on it, is to have you try to straighten the leg completely.  This is counter-intuitive to me, but at this point flexing your knee is less important.  If you can't force it straight, you'll always have a limp.
Twelve days after surgery, I went back to Dallas to get the 37 staples removed.  (Or was it 37 8x10 color glossy photos, with circles and arrows and a paragraph on the back of each one, explaining what each one was, to be used as evidence against us....?  Nah, must've been staples since it's not yet Thanksgiving, Arlo!)

Posted by Monkeywrangler at 7:32 AM No comments: