Just when you thought...

Just when you thought things were looking up...DH sent me a text this morning, after heading to work in the Honda, that he'd need a ride home. What?? Apparently on the drive in, the electronics in the car died.  Then as he limped it to the garage, and parked, it would not restart.  This sounds eerily familiar...as the Tundra did something like that back in 2016.  Not starting, electronics being goofy, engine dying whilest driving it... That turned out to ultimately be a $400 new alternator.  Bugger!  If it does turn out to be the alternator, I'm going to try the local alternator repair shop and see if they can fix us up for a LOT less money.

Tomorrow is National Stop The Bleed Day.  STB is a government program to teach anybody how to treat a human hydraulic fluid leak quickly (aka stopping the bleeding (hydraulic fluid)).  We're doing one of the classes tomorrow with a friend or two.  It should be fun, and involve consumption of Rudy's Breakfast Tacos!  If you've never had a first aid class, or if it has been a while, I highly recommend you check out the Red Cross offerings in your area as a place to start.  Then, remember next year, to sign up for a class on National Stop The Bleed Day.  They are often free, and may help you safe a life if you ever are in a trauma situation.  Think trauma won't happen to you?  Kitchen knives, broken glass, car crashes, chainsaw or table saw accidents...there are a myriad of ways to start bleeding.  It is a wise person who learns the best ways to Stop The Bleed!

I'm also miffed at the USPS.  No, not our local post office, but rather the Dallas Hub.  They've lost or delayed at least 3 packages of mine this week.  Most of them arrived in Dallas on Monday.  One I snagged Wednesday by getting the local super to pull it from the packages pile.  The others have never made it the 100 miles from D to here.  One has bounced repeatedly between the Coppell hub and the Dallas hub all week.  They KNOW it is supposed to come to Paris, because I'm seeing the item in my USPS Informed Delivery account (yes the PO will send you daily emails of your incoming mail and packages if you sign up for it).  One should arrive today, but the other is medicine that would be nice to get, before I run out!  Thank God it isn't DH's insulin being lost/delayed!  That would be ruined by now.  If you didn't know, insulin needs to be refrigerated until opened for use.  Once opened or warm, it's only good for 28 days.  Color me grumpy, this is the first bad service we've had in two years from USPS.

Well, time I guess to head into town to see what I can do for the Honda.  Maybe I can jump start it.

This week we opted to rent a pair of movies.  One I had heard of, the other was unknown by title, though I was well familiar with the star, Jackie Chan.  The movies are Darkest Hour, starring Gary Oldman, and The Foreigner, starring Jackie Chan.

I was most familiar with Oldman from some of his more outlandish performances, such as The Professional, and The Fifth Element, to name a couple.  He is a talented actor, but I was having problems seeing him in the lead role in Darkest Hour, a film about the first 2-3 weeks of Winston Churchill's tenure #1 as British Prime Minister.  I mean, he's a fairly lithe actor, with a bony facial structure...and lithe and bony Churchill was NOT!

However, being a history and WWII buff, and a fan of Churchill in general, I was willing to give it a chance.  I was not disappointed!  The film is excellent.  It is well worth renting.  The acting is excellent, the sets appear reasonably accurate historically, and the story compelling.  I do think they played Churchill a little too vulnerable compared to the historical truth, but I don't truly know.    Regardless, it was an enjoyable film.

The second film was Jackie Chan's The Foreigner.  I grabbed it, just because I enjoy Chan's films.  They're usually funny, action filled, and showcase a lot of martial arts.  Chan also does most of his own stunt work, (or did when he was younger).  I didn't even bother to read the box summary.  Had I done so, I would've been intrigued.

The basic plot is Chan plays an immigrant who has become a British citizen.  His daughter is killed in an IRA terror bombing, done by a new resurgent IRA which seems to be seeking to kick off the Troubles again.  Pierce Brosnan plays the second lead as a former IRA terrorist who has become a leading political figure in the 20 year peace.

What follows is a totally plausible story line, involving British/Irish politics, bombings, the IRA (old and new) and some interesting plot twists.  Having some passing familiarity with the Troubles in Northern Ireland, I was fascinated with this film.

It's not a comedy, not by a long stretch.  There's fighting, but not your typical Jackie Chan marital arts fest.  It's definitely NOT your typical Chan film.  But that notwithstanding, it is excellent!  It is an original tale, well acted on all parts, believable, and proves a great vehicle for Chan to showcase and stretch his acting ta lentsbeyond his previous light comedy and martial arts films.  It is probably his best film overall.


I heartily recommend both films!
Posted by Monkeywrangler at 7:35 PM 1 comment:


Posted by Monkeywrangler at 7:30 AM 2 comments:

Today was a day for little things.  Things got done, but not "big" projects.  We sort of needed a break too.  We rebuilt a firewood rack for the back deck.  I had salvaged it from the neighbors, who have a gas fireplace and didn't want it anymore.  Some fresh wood, and glossy black rattlecan, and it looks rather nice. 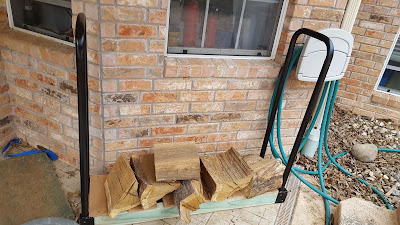 While I was working on the firewood rack, DH was building a new kindling rack for out by the woodpile.  This one is much deeper than our first racks of this basic design, and also used welded wire fencing to hold in the small pieces.  It should work a lot better, with fewer collapses of the kindling pile. 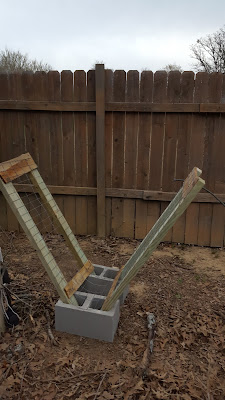 I split some wood, and while doing so, told DH of my desire for a piece of wood to block the splits from rolling back into my feet.  Some of the splits are rather large and heavy, and it is a goodly drop from the ram, to my toes!  And I don't always wear my steel toed boots to split wood...  So he ran with the concept, and built me a wood slide from some scrap wood and 2x4's.  You can see it there below in the photo.  It worked great! 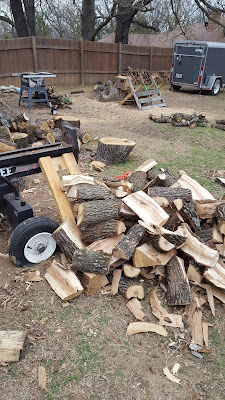 We also helped our church get some supplies for the upcoming security light installation.  DH knew what was needed, and so we met one of the deacons at Home Despot Depot and got what was needed.  Next up, getting the installation done.

And of course, today was St.Patrick's Day.  And silly me, I forgot to wear my orange t-shirt.  My father, being an Orangeman, convinced me long ago to wear orange on St. Patrick's Day.  Strangely enough, in High School, there were only a couple of people who knew why I did it.  They were teachers, and a close friend or two.  Monkey1 did wear her orange t-shirt today though.

The Monkeys sort of got a day off too.  They were dropped off at Petco, to help the local animal shelter with adoption day.  They walked a ton of dogs, and spent time with them.  Then they helped take down the pens, and get the dogs ready for transport.  They had a lot of fun, and their help was much appreciated.

And lastly FB reminded me today was the 3yr anniversary of Cody's passing.  It doesn't seem like it has been that long...I miss him. 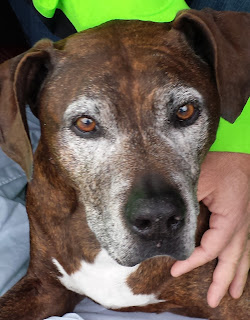 Posted by Monkeywrangler at 7:01 PM 2 comments: 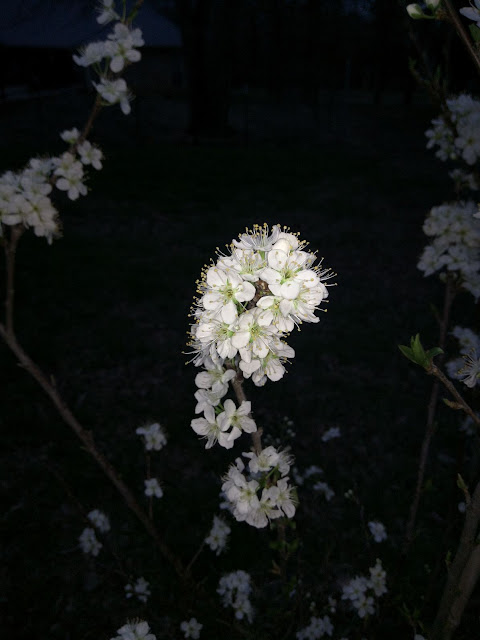 Posted by Monkeywrangler at 10:21 PM 3 comments:

He's always working hard, when we go cut wood.  This tree is significantly larger than the 20" Stihl 311 chainsaw he had available. 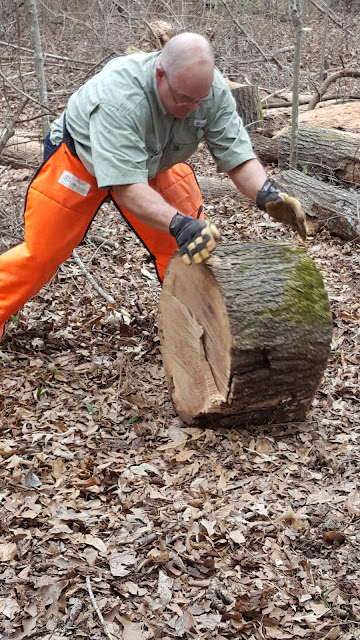 Posted by Monkeywrangler at 3:05 PM No comments:

Having just ended a 7-day period which saw us receive 13 inches of rain, with the last 3" coming last night, we are due to dry out, at least until Sunday, so they say.  Pine Creek is well out of its banks yet again today, flooding pastures on both sides of the main road into town.  So far though, it has not cut the road itself.

We find ourselves in the midst of several projects, both here at the casa, and through church.  Through church, we are running two water stops on the local half marathon on Saturday, and helping one of our members clear out a huge fallen tree on her lot.  We can't fix the hole the tree put in her roof, but at least we can chop up the tree once the insurance is settled.

Our other projects include continuing our demolition and remodel work on the house.  We have been diligently peeling wallpaper, scrubbing, sanding, and learning how to skim coat drywall with mud.  It is, for sure, a learning experience!  I have learned that I despise wallpaper!

Saturday was the day the kids and I were busy in the morning with helping support a half marathon.  DH stayed home to deal with the pool repair/electrician guy, who was coming to help diagnose a problem with the pool lighting.  Problem:  Pool lights quit working.  Answer: Bad GFCI.  Final answer:  WAY more complicated than just a bad GFCI...
The fix is still in progress, but what should have been a 30 min repair including the 20 min drive to the hardware store for parts, has devolved into a 6 hr  problem.  Turns out the wiring from the spa light, which runs to a box on the side of a tree in the dog-run (yeah....that's definitely gotta be code, bolting an electrical box to a tree!) has a short to ground in one of the wires.  But this can't be simple--the tree has grown around the offending conduits damaging the wiring and causing the short. 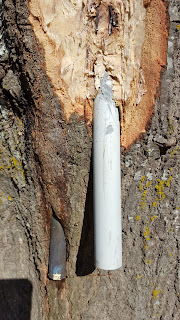 Well....the wiring was fixed, the lights worked, and now we know why the box was stuck on the tree where it was...yep, new problem to solve.  You know how water seeks its own level?  Yeah, ponder that one for a bit, and understand that the spa sits above where the wiring box now lives.  Yesterday sucked.  I can only hope and pray that today is better.
Posted by Monkeywrangler at 7:01 AM 2 comments: 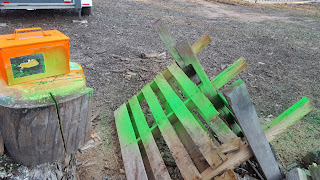 This is what happens when Hulk SMASH the recalcitrant can of green spray paint! It goes all 'splody!

Posted by Monkeywrangler at 5:59 PM No comments: