On dogs, and grieving

A blogger friend of mine recently posted that her 4-legged soul mate had to be put down this week.  She didn't elaborate the why behind such a painful decision, but those of us who love our dogs (or cats, etc) have had to face this reality before, or we will one day, probably sooner than we would like.

She lamented that of all the wonderful things she had learned from her dog, she had never learned to say Goodbye.  And that struck me.  It brought back sad memories of my last day with Charlie, and those damned onion-cutting ninjas struck, and it got mighty dusty in here.

It was then that I realized dogs can't tell you Goodbye, until their final moments.  It is their nature that way.  It is their final gift to us.  That's how it is, with dogs.  Each one must teach you their own Goodbye, for no two are alike.

But it may not be their most important gift.

From the dogs in my life who have crossed the Bridge, I learned important things.
From Napoleon, my childhood dachshund I learned to care for and to love dogs.
Charlie, my first Ridgeback, taught me to let go.

Cody taught me dignity in suffering and in death.
Ranger taught me to live every day to the full, for we never know when Goodbye comes. For sometimes it comes far too soon. 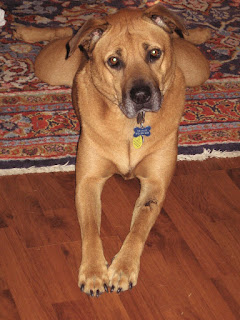 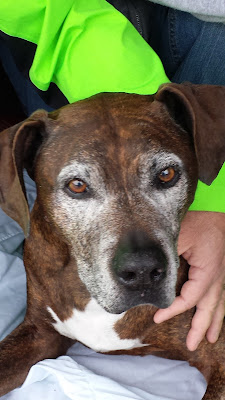 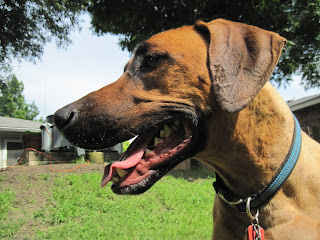 Posted by Monkeywrangler at 6:46 PM 2 comments:

Catch-22, it's not just a book and a movie, it's trying to get a state issued ID for my oldest-but-still-a-minor daughter.  Talk about frustration!  You basically have to provide so many documents just to get the document you need, that it is impossible to do. The primary docs they want you to provide, are the docs you are trying to get for the first time.

So to get a TX state ID, you have to already have a TX state ID that has expired.  Or a passport, or immigrant visa, or a host of other things that a young teen doesn't have yet.

I swear, it's enough to give me grey hairs!

So lacking the state issued ID, or Drivers License (yeah, y'all want my 15yr old to start driving yet??? I think NOT!) we have to resort to the secondary and tertiary documents.  You'd think an original birth certificate and SSN card would suffice, right?  Nope.  They still want another doc from tertiary list.  So, off to try to get vaccination records from their former pediatrician's office...because that's the only document we can actually have a chance to obtain.

Thankfully, the former ped's office was happy to oblige with official shot records on short notice.  And after DH digging through boxes of docs last night after work, he found SSN cards on everybody.  So, it was off to the bank this morning for me, in order to see if we put the birth certs in the safety deposit box.

I thought the bank opened at 8:00, and so arrived at 8:27am, only to find out they opened at 9:00am.  Argh!  Off to the coffee shop across the street, for a second cuppa this morning, and a chance to surf the news article on the Wikileaks CIA dump.  Fascinating stuff there!  I strongly urge y'all to read the news summary ( I found mine via DrudgeReport).  The implications are staggering.

And at last, some good news for me!  The box yielded all three Monkey birth certs, so everyone is going to get their state issued ID cards today!  Then I can lock them up securely, until needed!  At this age, they're more likely to lose them than need them.  But when they do need them, now I will have them!

** Update:  Well, seems the website has incomplete information.  Go figure.  After arriving with all 3 Monkeys, all their docs and money, I find out that I need to prove MY residency as I am vouching for theirs.  Only, my DL is not an acceptable document, though my other state permit IS,  This is ridiculous, as I had to prove residency to get my TXDL in the first place!  They said the water bill would work...so after driving to the Water dept, I find out it will not work, as the water bill is in DH's name, not mine.  And the new truck insurance card hasn't arrived, and for some reason I was unable to attach the pdf of the card to an email to DPS.  So then I had to drive all the way back home, print out hard copies of the current truck insurance which has my name and address on it, then drive back to DPS, and try again...sheesh!  By the time  DH gets home from work, I might be 3 fingers deep into the good bourbon, and sitting in the hot spa!  It's just been that kind of day.