My eternal puppy, Indy, turned approximately 7 yesterday.  By most accounts that makes him a new "senior dog".  His true birthday is unknown, being a rescue from the Collin County kill shelter.  However, we rescued him on June 8, 2013, so that became his birthday for all intents and purposes.  At the time we got him, we were told he was around 2 years old.

The Monkeys persuaded me to take Indy, and Shiloh, who with an adoption/birthdate in mid January, never gets to go to DQ for ice cream.  (too darned cold in January even in Texas!)


So I loaded up the kids and the two dogs into the truck and off we went to the local DQ. 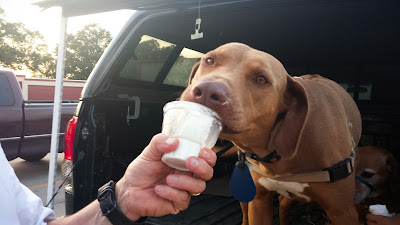 Indy knew right what to do with HIS ice cream!  He dove right in, and started tongue-polishing that serving dish. 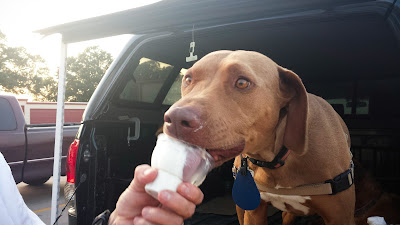 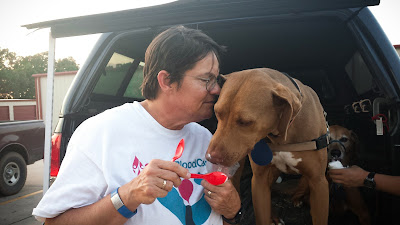 Shiloh wasn't so sure what to do, despite being the Dairy Princess.  Eventually though, she decided it was a treat, and despite Indy trying desperately to steal her soft serve, she finished it without assistance.

More storms popped up here late yesterday afternoon.  Not a lot of rain at the casa, but in town there was minor flooding.  Of course, town has minimal runoff infrastructure, so it always floods if it rains.  But the cloud-to-ground lightning was impressive!  I'm glad I had the foresight to put Indy in his Thundershirt and give him 1.5 K9 Calming treats before the storm got to the house.

Lots of work to do today around the place.  Yard needs mowed if it dries out enough.  House needs swept and vacuumed.  Time to slay the regenerated Laundry Monster.  Chickens and chicks need time in the chicken tractor too.

Then there are the town errands on payday.  Time to get more chicken & chick chow, grease for the mower transmission, steal DH's car to get new tires on it while he is at work, and groceries to feed three teens and the two of us for a couple more days.

On the bright side of things, the Santa Rosa plums are turning a lovely shade of red.  I just hope the birds and squirrels don't ruin my harvest!  Otherwise, it might be squirrel stew for dinner!

I'm still slogging away at my 187# lifts for the Lifting the Stigma Challenge. (www.liftingthestigma.co.uk)  Currently at 4505 reps to go.  I am hoping to have time today to get another set done on this.  I know I'm probably losing strength on my other lifts, because this challenge is wearing me out on the days I do it, but it is the first time since I started lifting, that I've prioritized volume over adding weight to the bar.

The storms rolled in around 04:00 this morning, though I think it was the screaming sinus headache that woke me.  The kind of headache that only coffee and being vertical will alleviate.  I had hoped to sleep in a little this morning, with DH having the day off, but it was not to be.  Even the dogs, disrupted by the thunder, had to contribute their cold-nose alarm to the mix.

I staggered out of bed, downed a couple Vitamin-I, and head toward the kitchen for the juice of the blessed bean, knowing IT will be the thing that mostly removes the pain in my head.

Seated in the breakfast nook, at the little table that looks out over the back yard, sipping java, the light begins to change, even as the storms continue.  Dark initially, when I came out for coffee, slowly a pinky yellow light crawls over the land.  I know it is the storm clouds filtering the rising sun.  But it is beautiful.  I also know the camera won't do it justice, so I must make do with my mind's eye.

I know this time is called the photographic golden hour.  I've seen its effects before, but seldom have captured it with a camera.  Wiki defines it thus:  In photography, the golden hour is a period shortly after sunrise or before sunset during which daylight is redder and softer than when the sun is higher in the sky. This is the opposite of blue hour, which is the period just before sunrise or just after sunset when light is diffused and even.

As the light brightens, I see rain splashing on the water out back, I see the hens huddled underneath the coop--the storms and the sun having driven them awake and outside to their run to forage, even though there is a feeder in the coop for them.  The world outside, and my aching brain slowly come awake as the light changes.

Time, coffee and verticality all serve to ease my headache.  I see a finch perching on the downspout, searching for bugs to eat.  The squirrels come out, and the storms move away east.  The golden hour is past...

Posted by Monkeywrangler at 9:38 AM No comments: