Saturday evening, there was a knock on the front door.  This was unexpected.  DH popped up to go see who it was and what they wanted.  After a few minutes, he comes in with a funny look and says it was the next door neighbor.  I asked what was up with the neighbor, and DH says, "Not him, our A/C."

Ooh...not good!  It's never a good thing to have someone tell you your A/C is about to crap out, in Texas, in August.  Apparently the condenser fan motor was/is failing as it was making some dying-rabbit-mechanical-death-squeal noise.  Even DH with his lousy hearing, could hear it.  But it was still running, and cooling....for now.

Sunday evening we went out to disassemble what we could, and get the part# info off of the motor.  DH also wanted to shoot some white lithium grease into it if possible.  He assured me that it should not be a difficult install.

We took things apart, and got some grease worked down the motor shaft, then reassembled it all.  I took pictures of the motor ID plate, so to be certain of buying the right replacement, if I could find one. 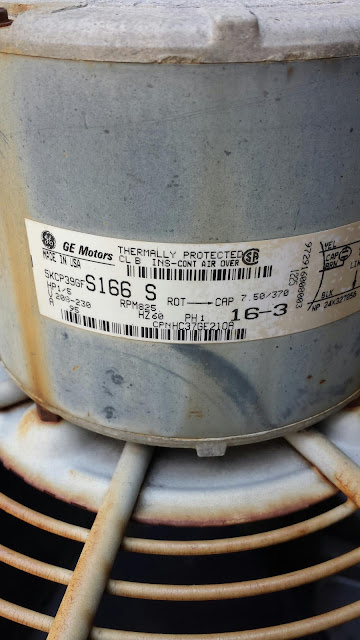 Cut to today, and several phone calls and time web surfing later, and I found our motor!  It was at Grainger supply, about 20mi away.  I loaded the Monkeys and off we went.  Grainger's is great!  You place your order over the phone or online, and tell them what store you want to get it at.  They will pull the items and have them ready for you to pick up.  FAST.  I called in the early morning and they had the order ready for me when I arrived at 10:30am.

Last night we tackled the replacement job on the motor.  The motor was, after all, original to the house, and at least 17 years old.  It's been worked like a rented mule!  The work to replace it was far simpler than I had expected.  (See, DH is the family electrician, and I'm more the family plumber!)  It was a straight forward replacement, and it dropped right in. 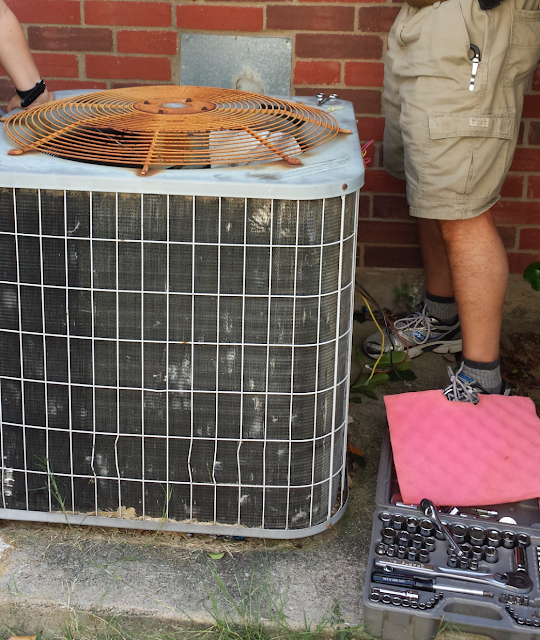 It was maybe 30 minutes, start to finish.  It was 7 sheet metal screws, 3 spade connections, and  4 mounting nuts, and the motor.  The capacitor was recently replaced, so we left it alone.  Should the motor ever need replaced, I know now I can do it without complications.  The Monkeys got to watch the whole thing too.  I am hoping they learned something.  I know I did.

Posted by Monkeywrangler at 10:42 PM