After Family Game Night, which ran long, as Liverpool Rummy often does, DH and I got to sleep a bit later than normal.  It was a fun game, though I lost badly, with DH winning the final Down and Out hand, and Monkey3 the overall winner on points.

I found myself awake at 04:00, though I managed to stretch the snoozetime until almost 5:00am.  Seeing DH go off for a check-ride on his Bacchetta CA2 with the new modified J-bar set from Schlitter Bike.  Changing the bars over, necessitated some significant reworking of the brakes and drive train, though it does appear to have fixed his shifting issue, and now he can use the granny gear if necessary.  Around here where we ride, a granny gear is not really needed most of the time, but when we go up to KS to ride, boy howdy it's handy!

While seeing DH off on his check ride, we both noticed the broken sprinkler head in the subdivision common area.  It launches a geyser of water some 20' high, watering nothing but the street and sidewalk.  If it weren't for the lack of drought here currently, the city would have fined the HOA for wasting water.  Which can total several thousand dollars, that ends up getting passed on to us homeowners via special assessments.  I managed a passable low-light shot of the geyser, so I emailed it with a repair request to the management company for the HOA.  I wonder how long it will take for them to repair it? 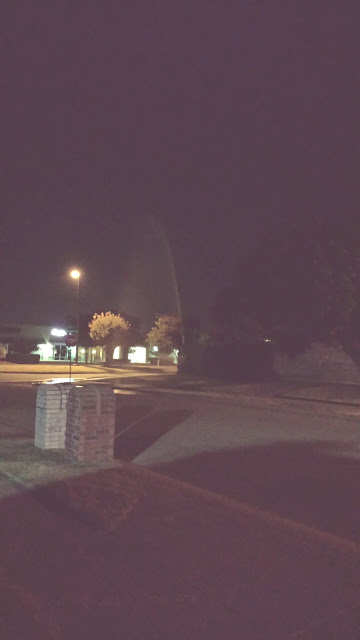 Not a lot scheduled for this week.  I get my hair cut finally, on Friday.  Time to shear this shaggy mop of hair!  Just in time for the HHH bike ride at the end of the month, and not too far out from vacation either.  I am hoping for cooler weather for HHH, to increase my chances of completing a century this year.  It's a good ride to do a 100 mi on, as it is well supported, there's a real supportive energy there in that crowd, and it's a relatively flat course.  The heat and tendency for high winds are the main problems one usually faces on HHH.

But, after riding with DH Saturday, for 53mi in moderately warm weather, I felt great!  As in, gee, I probably could do another 50 miles, if I had planned for it. Poor DH though, he suffered a grand total of 5 front wheel flats Saturday!  He had a tire we had booted (repaired a small hole cut in the sidewall).  But the boot abraided the tube and that one flatted.  So we replaced the tire with a new one we had with us.  Then there was a succession of patched tubes, where the old patches failed, for a grand total of 5 flats!  It's just no fun, when the Flat Fairy comes to visit you.
Posted by Monkeywrangler at 11:02 AM