With our re-entry into cycling last summer, we discovered a need for lights, both tail lights and head lights.  We’ve been acquiring and trying out cycling lights since then, as our schedule, and winter dictates evening rides and lights.  This post will concentrate on tail lights.  The subsequent post will feature our head light selections, two of which we just acquired today.
We used to have a lot of nice bright tail lights.  That was BK, or Before Kids…13 years or more ago!  Of all those lights, we found that only 2 were able to be restored to working condition.  One of those is on my mountain bike, and the other we lost the bike mount for, so it resides on Dave’s Camelbak Mule pack.  Neither of these lights is really bright by today’s standards.  So we began shopping.
The first lights we got, were more designed as “See Me” lights…they ran on 2032 coin cells, and had a silicone band to attach them to the bike with.  They’re made by Blackburn.  They’re not horrible tail lights, and when the battery is fresh, they are reasonably bright.  A primary issue though, is battery life, and the lack of recharge capability.  We figured on eventually putting them on the kids’ bikes for riding on the MUP (no car traffic there). 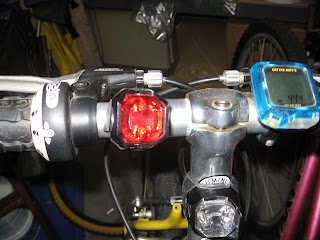 So we began to research more on modern tail lights.  A name we kept hearing was DiNotte.  DiNotte this…DiNotte that…buy a DiNotte and you’ll be happy…except when you see the price tag!  Ouch.  They’re not cheap lights.  But then quality usually has a price tag to go along with, doesn’t it?

Then for Christmas Dave’s Mom got the kids their own Blackburn Mars 3 tail lights, which are much better than the first Blackburn lights we bought.  These run on 2xAAA, and are quite bright, with 3 modes (2 flashing and one steady).  Dave has mooched one for the headrest on his F5 recumbent.  He leaves it on steady red, for better depth perception for approaching drivers.  Still, it pales in comparison to the DiNotte 140L.  If I could afford it, I would cover the back of both our bikes in DiNotte 140L’s or their newer versions…oh, for a winning Lotto ticket! 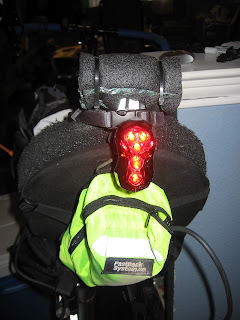 I too have been using an extra rear light to along with the 140L.  I use an Inova 24/7 multi-mode light.  It sort of looks like a miniature stop sign with a battery box on the bottom of the octagon.  It is small, but bright, and has 3 color options, and a total of 7 modes.  I also run it on either steady red, or on 3-color flashing mode, with red, amber and white flashing LEDs.  It runs on a CR123 battery, and will accept a 3v rechargeable one (I use a LiFePO4 version).  I get a good run time, and find it easy to carry spare batteries in a small plastic tube to protect from moisture or accidental shorting. 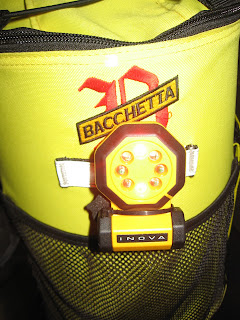 And now to what I consider the best of the tail lights out there, even with the high price.  The quality of the build is worth the expense, and the brightness of the light is truly stunning.  The DiNotte tail lights are worth every penny (and more if you can snag them on the used market!)  They are pleasing to look at, and eye-catching to view when they are on.  The all-metal housing is good for alleviating any heat build up issues,  the retention system, while strange, is not uncommon for recent lights, and the bands do seem a lot more durable than I expected.  We also have a bunch of them, just in case!

We lucked out and found a DiNotte 140L red tail light for a relatively cheap price off of Craigslist.  We were really wanting the 140L tail light as it runs on 4x AA batteries (NiMH) of which we have a plethora! But the problem was we needed more than one lights as we both ride, and it was getting to be a problem moving the light between bikes.  So with hunting the 'net, we were finally able to snag 2 more 140L's and life is good! 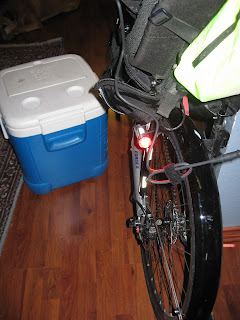 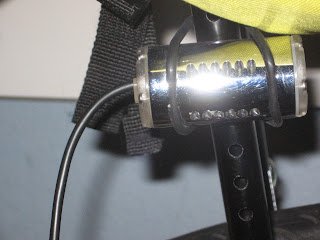 The only weak point I can see in the 140L system is the attachment of the battery block to the power cord of the light.  Using a 9v style connector puts an odd strain on the connection, and unless you are using the factory cordura battery bag, the power cord tends to just pop off while you ride.  This is not a good thing!  Since we started out with only 1 battery bag for the two 140L’s we ended up buying, I made do with a different battery bag that does not apply the retentive pressure across the power cord connection necessary to make it stay connected.  So I have resorted to using a rubber band wrapped around the connection.  Not elegant perhaps, but cheap and functional.  I guess I am too cheap to order another battery bag from DiNotte!
Posted by Monkeywrangler at 5:14 PM