Yesterday was the 30th annual Tour de Paris Texas, an amazingly well organized bicycle ride. Both DH and I have done it in the past and enjoyed ourselves, but we had never done it together. Since we ride at fairly different paces, there's only one good way for us to ever ride together comfortably--Serenity! 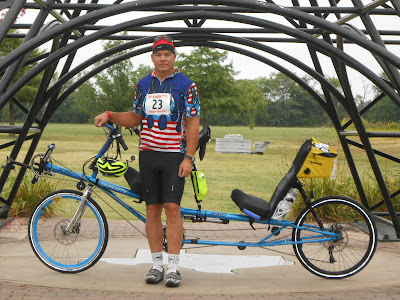 Yes, we rode our tandem on TdP. I was wanting to push our distance a little on the tandem, as we have plans for an 80 miler later in the fall, and so far our longest ride had been 41-42 miles. Plus, having turned the big Five-O back in December, I needed to fulfill a goal of riding 50 miles, one for every year I've been on this blue dirtball. Unfortunately the distance splits were either quite a bit shorter than our 41 mile high, or a fair bit longer than it.

What to do? What to do? We thought about riding the 60k distance, and then going a few miles down a longer route, turning around and riding back to the finish. This was the answer we chose, though not the one we actually did. At the SAG stop where the routes split, we headed off down the 90k route, planning on reversing course at 25.5 miles on the GPS. The road had other ideas though. Those first few miles were trending downhill...which meant a return ride all uphill. Not our favorite option on a tandem. On a downhill, gravity is your best friend on the tandem, but uphill? Not so much! As we hit that imaginary turnaround point, we both reached the same conclusion--better the unknown road ahead, than the long uphill behind us. 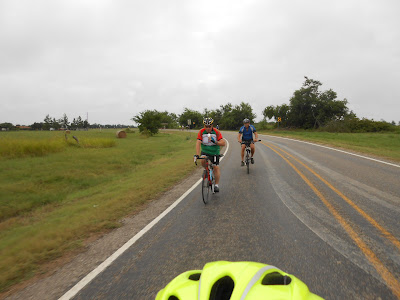 It occurred to me that the 90k route was over 50 miles, and I could hit my goal, plus a mile for every month I was late in meeting the goal. I watched the GPS tick the mileage up, until I saw this-- 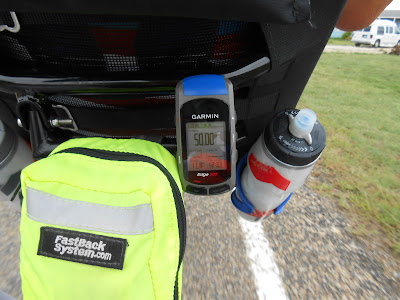 The Tour de Paris as usual, was very well supported, with 3 area bike shops providing mechanical and roving support, lots of volunteers manning the SAGs, a good selection of foods at the SAGs (even pickles and pickle juice for DH!), excellent route marking and law enforcement support to man the major intersections for safe traffic control. A lot of other rides could learn a lot from the good folks who put on the Tour de Paris.

It was a great way to reach a personal goal. We were both tired by the end of the ride, and the post-ride hamburger was most welcome. Plus, how often do you get to see the Eiffel Tower... in Texas? 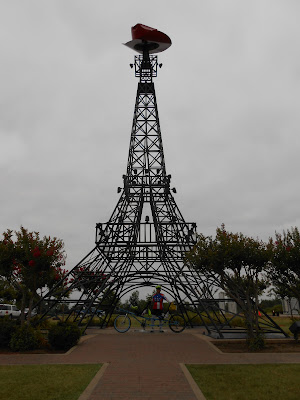 Here's a look at our Strava data.

Posted by Monkeywrangler at 8:53 AM