Hotter than a dead chupacabra!

Yesterday I decided to go out for a longish ride.  It was hot.  Somewhere around 98*-103*F by the time I was done four and a half hours later.  I managed 56 miles on the recumbent, and was comfortable, though I think DH has given me his curse of cramping.  I had minor issues with the right leg on and off during the ride, though the worst of it was at the very end just before the final climb.  I'm not a cramper by nature, and I was pushing water and electrolytes all day.  Fortunately, some minor stretching seemed to control it.

The route was over known territory, and took me past a lovely ranch with some very unique cattle on it.  These are not Texas Longhorns, but appear instead to be Ankole-Watusi African cattle. 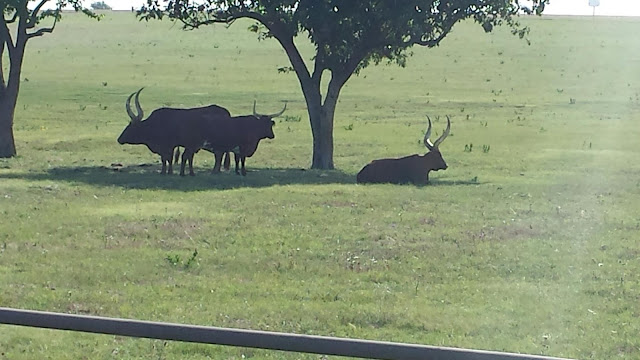 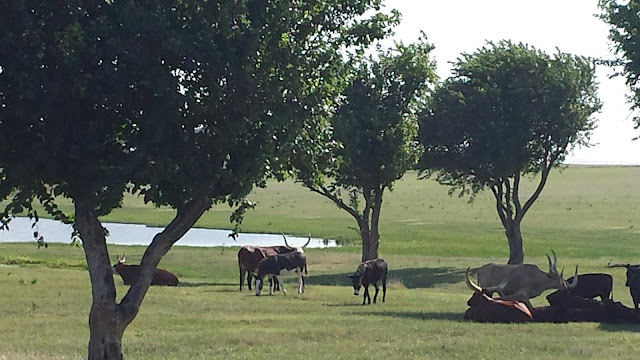 Their horns are even more impressive when they are nearer to the fence.  I saw them up close, once last year when riding the same road. 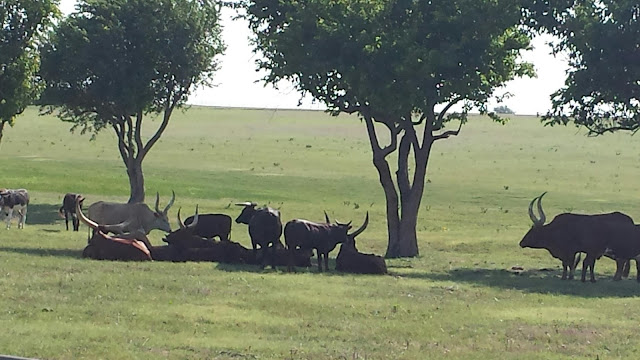 This time the cattle were hanging out in the shade.  As I forgot my good camera, I had to make due with the one on the phone.  I had been hoping to get pictures of these cattle.  I only wish they were closer to the fenceline, so you could have enjoyed them more.

You may be curious as to the title of this post.  It happened just up the road a ways from the cattle.  There, on the side of the road less traveled, was a pile of bones.  I saw first, the ribcage and sternum.  I stopped to investigate, thinking it might be the ever-elusive deer.  It was not.

It was instead, a dead chupacabra!  Yes!  That mythical Southern/South of the Border creature!  Dead...Right There!  (Ok, so not really, and I DO know what creature it really is, but bear with me.)

I took the picture below and sent it off to DH's phone.  When I got home, I showed it to the Monkeys, all of whom love to watch the doofus Monster-of-the-Week shows on cable.  I told them chupacabras were real, and that I now had proof!  I had seen the remains with my own eyes, and would share it with them. Hehehe...

They looked, and guessed all sorts of various and sundry critters, but have yet to get it right.  Can you tell what it is?  Post your guesses in the comments if you like.  The answer will be below the picture. 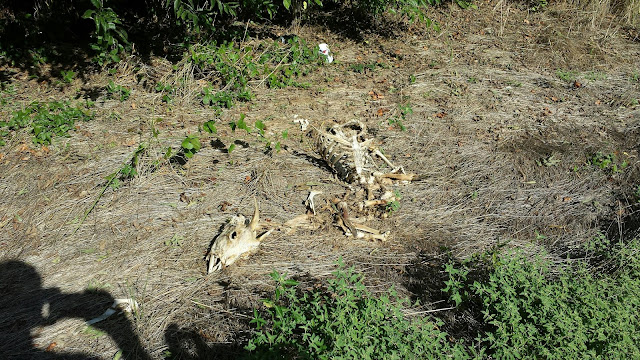